Tips to Stop a Dog From Chewing on Shoes 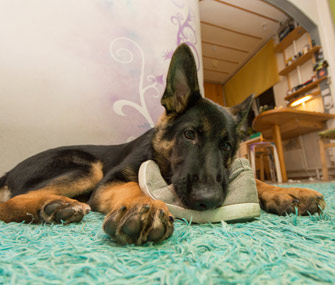 iStockphoto
If you allow your dog to chew on things when she's a puppy, there's a good chance she'll continue the behavior in adulthood.

We allowed our dog to chew on an old pair of shoes as a puppy, because it was so cute. But now she’s a year old, and she chews on any shoes she finds — most recently, an expensive pair of dress shoes. We get mad when she does this, but we know it’s because we allowed it early on. Can we stop her shoe-chewing habit, or are we doomed to live with it forever?


The golden rule of raising a puppy is simple: Don’t allow behaviors in puppyhood that you wouldn’t want from a full-grown dog. Anything a puppy practices in her formative weeks and months is likely to be a habit by the time she’s an adult.

As you’ve learned, a behavior that’s cute in a puppy, like slipper chewing, can be less appealing — if not downright destructive — in adulthood. And when that puppy becomes an adult dog with a greater resolve, increased independence and a body that’s larger, stronger and faster, breaking bad habits can be far more challenging.

Stop Bad Behavior Before It Starts

Almost everyone who has raised a puppy can look back and identify things they would do differently if they had the chance. We do our best for our pets, but missteps happen no matter how well intentioned our aims. But an error in puppy training doesn’t mean you are doomed to a lifetime of shredded shoes. An established habit is harder to break, but with diligent management and training efforts, it’s usually quite possible.

One of the simplest strategies of puppy raising is to prevent unwanted behavior from the very beginning, before it starts. Preventive efforts include removing opportunities to engage in the undesirable behavior, providing proper outlets to channel energy away from those behaviors and removing any associated reward when unwanted behaviors do occur. Even though your dog isn’t a puppy anymore, this strategy will still work to help put a stop to her shoe chewing.

How to Change Your Dog's Chewing Habits

You will need to start by removing the temptation to chew your shoes by making it impossible for your dog to get them. Keep shoes in closed closets, in latched bins or on a shelf that is too high for your dog to reach. Don't leave shoes anywhere your dog can easily get to them, like under the coffee table or on the floor in your bedroom — and remind visitors and family members to do the same.

Instead, put appropriate chew toys out for your dog to play with. And when she chews on something acceptable, like a Kong or rope toy, praise and reward her.

If you find her chewing on a shoe, resist the urge to yell at her or punish her — scolding may be negative attention, but it’s still attention, and it reinforces the chewing. Instead, take the shoe away without comment or reaction and redirect her to her chew toys. The more you do this — praise her for chewing the right things and withhold attention when she chews something she shouldn't — the more likely she is to gnaw on a toy and not your shoes.

Every time a dog engages in a behavior, especially a behavior that pays off with rewards like extra attention, the habit becomes more ingrained. An established habit is harder to break, but with time and patience, it can be done.