Home ›
Our Pet Experts ›
Toys That Are Safe for Your Kitten

Toys That Are Safe for Your Kitten 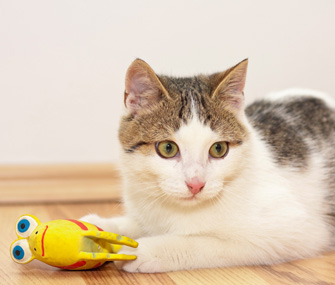 Kittens love toys, and half the fun of having a kitten is playing with him and his toys. Toys are healthy for developing kitten minds. Kittens that are deprived of toys may have difficulty learning to play with them as adults. As with children, a variety of toys are now on the market designed to stimulate the intellect and the various senses, as well as to appeal to different age groups. And as with children, chances are your kitten will wander into your cupboard and find a plastic cap he likes much better than the expensive toy you've just presented to him. But be careful before you let him play with items he's found around the house. Many of them can be choking hazards or toxic if swallowed.

When choosing a cat toy, whether homemade or store-bought, consider the following: