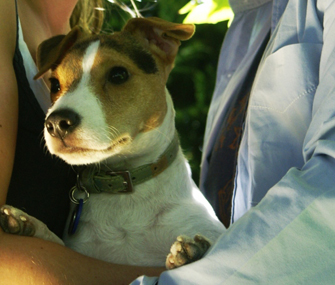 In a few weeks I turn 40. I’m almost at the age when people will stop asking Mike and me, “When are you having kids?” I don’t mind the question, just what it implies: You’re not really a complete family unit until you add a human or two.

Uno and Maybe, the loves of my life, aren’t “practice” or “starter kids” or “surrogate children.” They aren’t fulfilling some latent maternal instinct I have yet to acknowledge. They’re my delicious-smelling lumps of insta-bliss who think that a benevolent kibble fairy leaves treats in their crate when it’s time to go to bed.

You can’t procreate that kind of magic – it wanders in on four legs.

Go ahead, feel sorry for me. Try to make me understand that I won’t have triumphed over life’s truest struggles until I’ve spent six months in a state of severe sleep deprivation or sacrificed my favorite sweater to projectile vomit. Somehow I’ll manage to find meaning. (Perhaps the puppy diarrhea on the new carpet will get me through the tough times.)

In all seriousness though, it’s not a contest – or really even much of a comparison. I’m not trying to convince you that my canine dependents are better than your human dependents. Only that mine are cuter. I mean hairier! Whatever.

A few Thanksgivings ago, Uno came home from doggie daycare with an art project. It looked like one of those turkey drawings you do in kindergarten – the kind where the teacher traces the outline of your hand, and your fingers become the feathers.

At daycare, one of the staff people had traced around Uno’s paw on a piece of construction paper, pasted feathers to the page, and scribbled his name. I loved it. We put it up on the fridge. Not because we were so proud of Uno’s artwork, but because we found the concept hilarious.

“Get it? He’s our Doberman!” I’d say, cracking myself up. And yet it took me years to warm to the idea of us as “doggie parents.” I had even written an article asking friends to slap us if they ever heard Mike and me refer to ourselves as Mommy and Daddy. There’s no way we would become those people.

Well, Younger Leslie, breaking news: You’ve become those people. You’re a soccer mom without a ball – and your little one plays naked and poops on the field.

Folks, I’m not proud to admit it, but I think I inadvertantly convinced a few of the neighbor kids that I actually gave birth to our pups. I know: That’s not funny – it’s perverted and inappropriate. But kind of funny, right? And true? Sort of?

Meanwhile, I’ll long for the day when rescue is considered as important as reproduction. I’ll endure all the pitying looks my baby-having pals will bestow. I’ll suffer the knowledge that my pride and joy will never grow up to be president, nor probably even vice-president. But I won’t feel incomplete; my family is perfect.

I mean think about it: The Duggars have 19 kids, but no one asks them when they’re getting a dog.

This article first appeared on Dogtime.com