Weighing the Pros and Cons of Invisible Fences 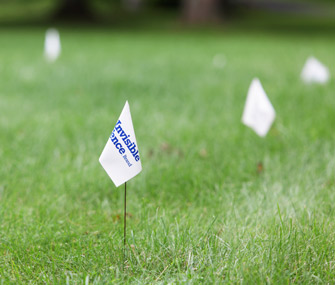 Last fall I purchased a home in North Idaho. Although I was thrilled by the open space and beautiful views of the surrounding mountains, I faced an immediate dilemma: My acre of land was fenced with white, open-slatted fencing that would not safely contain my two Pugs. Although the Pugs rarely venture far from my side, I wanted the added security of a fence. When I began looking for a containment system, I faced major restrictions. Neighborhood codes only allowed a few specific types of fencing, all of which were extremely expensive. In addition, my new next-door neighbor was less than thrilled at the idea of altering our shared fence line to accommodate my dogs.

The easiest answer to my problem? An invisible fence. Invisible, or electric, fences work by delivering a warning sound followed by an electric shock through a collar when a dog crosses the boundary line. But was this the right choice for my Pugs?

Before I tell you what I chose, let’s weigh the pros and cons of electric fences.

An electric fence is affordable for most people. Many neighborhoods and developments have strict codes governing the type of fencing, if any, that is allowed. Although electronic fencing can be expensive, it is often significantly less than the cost of materials and installation for traditional fencing, particularly the high-end options required in some places.

Electric fences give homeowners some flexibility. Electronic fences don’t interfere with surrounding views or break up green spaces created by open property lines. In addition, an electronic fence can be installed more quickly than many conventional fencing options.

An electric fence allows a dog to roam. Electronic fences can be designed to cover up to 25 acres. They also are easily installed on difficult terrain that may be more challenging for traditional fencing.

Invisible fences are effective most of the time. Some pet owners opt for an electric fence because other alternatives have failed to keep their dog inside (the dog either climbs over or digs under a traditional fence). In most cases, dogs quickly learn to stay within the boundary line to avoid the warning signal and subsequent shock.

The shock has to be fairly significant and painful. In order to deter the dog from venturing across the boundary, the shock has to be severe enough that it startles and alarms him. Many electric fence companies compare the shock the dog receives to the type of static electric shock we feel when we walk across carpet and then touch a metal door handle, but in order to really act as a deterrent, the shock needs to be more substantial than that.

An electric fence is a form of punishment. I don’t recommend punishment as a training technique because it can lead to some unfortunate and dangerous associations. In the same way, a dog restrained by an electric fence may learn to associate the sensation of the shock (the punishment) with something completely unrelated to the fence. For instance, if the dog runs up to the boundary to greet the another dog and is shocked, he may associate the other dog with his pain. Even a friendly dog can become agitated, fearful or even aggressive when a stimulus is consistently associated with pain or a threat.