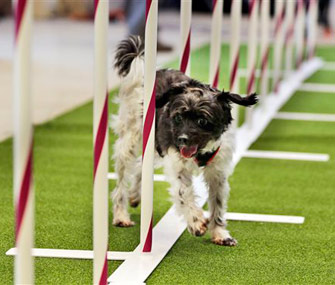 AP
Alfie the Poodle-Terrier mix shows his skills at a Westminster news event.

Leaping and swooshing through an obstacle course of tunnels, jumps, and weave poles, 225 dogs and their handlers will make canine sports history on Saturday in New York City. For the first time since its earliest days, a Westminster Kennel Club Dog Show event will include mixed-breed dogs.

The second-longest continuously held sporting event in the country, Westminster has showcased purebred dogs at their finest since 1877. This year purebred and mixed-breed canines will compete at the first-ever Masters Agility Championship. You can catch the Saturday finals on Fox Sports 1 from 7:00 to 9:00 p.m. ET.

Of 563 applicants, 225 dogs were selected by a random draw to run two qualifying rounds: a Standard Agility course and a Jumpers With Weaves course. After zooming through hairpin twists and S-curves, the dogs with the highest combined scores from each height class will proceed to the final championship event.

For exhibitors, the chance to show off their dogs’ athleticism at this venue is groundbreaking. 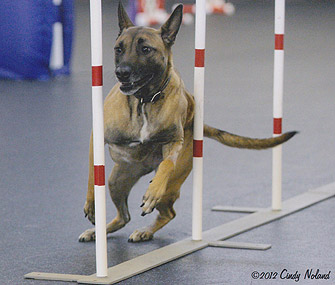 Courtesy of Brenda Finnicum
Rose the Belgian Malinois was within hours of euthanasia before her adoption.

"I’m thrilled that Rose, my 5-year-old Belgian Malinois, is eligible to compete at Westminster, given her rough start in life," says Brenda Finnicum of Freeville, N.Y. "Before I adopted her from the American Belgian Malinois Club, Rose was within hours of euthanasia at a shelter in Florida because she failed two placements. When I took her home she had a lot of issues, but we worked hard and she earned obedience, rally and advanced agility titles, so she’s ready."

Irene Palmerini of Toms River, N.J., was elated to learn that Alfie, her 7-year-old Poodle-Terrier mix, was entered in the show. "Alfie was a pet shop rescue, and I’m proud that as a mixed breed, he represents every person’s dog," Palmerini says. "It’s a wonderful opportunity to let people know that your dog doesn’t have to be a purebred dog to compete in agility, because this sport is about performance."

A step up from the novice class, the Westminster Masters Agility Championship is open to dogs competing at the Excellent and Masters levels. At this level, spectators can expect to see some tough competition.