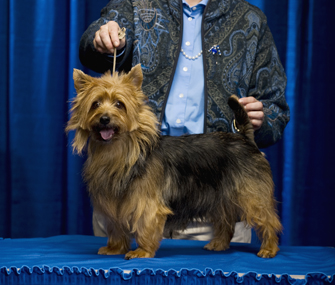 It looks like an easy job, doesn’t it? Walk a dog into the ring, present him to the judge, take him around the ring a couple times, and walk off with a blue ribbon. Top dog handlers will have you know there’s more involved than that when it comes to showing dogs to their championship, and especially presenting them at a prestigious venue such as the 136th annual Westminster Kennel Club Dog Show at Madison Square Garden in New York City, where the eyes of the world are on the dogs at the other end of the leash they’re holding.

Vetstreet tracked down some of the most successful handlers willing to share their secrets and training strategies.

Pre-Show Training: Running, Nail Trims and Even Massages for the Dogs

No show dog is an overnight sensation. It can take a year or more to prep a dog for a show like Westminster, says Clint Livingston of Brighton, Colorado, whose string of canine clients includes top-ranked Cavalier King Charles Spaniel GCh Miletree Northern Star at Shirmont, and the No. 1 Chinese Shar-Pei GCh Vaje’s Miss Jayne Hathaway.

“They’re bathed, trimmed and groomed weekly as well as at every show,” he says. “They’re doing roadwork, which is either running alongside a bike or on a dog trotter, usually three or four times a week, if not more.”

Some dogs, such as the number-one-ranked Bloodhound GCH CH Quiet Creek’s Kiss and Tell, handled by Bruce Schultz of Bonita, California, have regular sessions with a canine massage therapist and chiropractor.

Keeping these dogs conditioned so they are in top form is an ongoing process, Livingston says.

Show Prep: Selecting the Right Outfit to Complement — or Distract From — the Dog

Presenting dogs to the judge so their best points are on display is a special skill. A lot of that skill is acquired the same way a musician gets to Carnegie Hall: practice, practice, practice. But there are also some tricks of the trade. Knowing what a judge likes to see, whether it’s a pretty head or a nice top line, is key, says Laura Bergstraser-Lorenz of Colorado Springs, Colorado, who will be showing her top-winning Smooth Collie at the Garden.

“Our job is to know what the judges like and point out what that dog has to offer that judge,” she says.

Part of that involves wearing clothes that will set off the dog and help him stand out from the rest.

Conversely, if a handler wants to de-emphasize a particular point, he or she might wear an outfit that matches the dog, in an attempt to mask less-than-perfect movement or structure. It's all part of a plan.

Show Strategies: Treats and Tricks to Help the Dog Shine

Then there are the dogs themselves. Some are natural show dogs and need little encouragement to strut their stuff in the ring. Others require some cheerleading to get them to put their best paw forward. Puppies, for instance, can be anxious because the show environment is new to them. Schultz plays with them a lot in the ring to get their attention and take their thoughts off their worries.

And some dogs, well, they might just as well be holding up a sign that says, “Will work for food.” They all have their favorite bait—which you’ll often see handlers pulling out of their mouths when they want to get the dog’s attention. Schultz boils and bakes as much as 15 pounds of liver a week. Livingston carries a whole smorgasbord in his pocket, everything from beef liver to smoked beef heart to fajita chicken to chicken jerky. Some dogs like to hear the crack when he breaks off a piece of a hard chicken strip. Others are flavor hounds.

“My Cavalier King Charles Spaniel works better for fajita chicken,” Livingston says. “He gives me more expression, more animation, so if I need more from him I’ll pull that out. The Shar-Pei baits best for smoked beef heart. You learn what they like best and what they’re going to give you more with.”

At a show like Westminster, Livingston says, some dogs can tell it’s a big deal and up their performance accordingly.

“There’s so much electricity in that building, it’s so crowded, everyone’s so jazzed up, I feel like my dogs give me a better show there just because I think they feel all the excitement in the air,” he says.

Much work awaits all the handlers preparing their dogs for the big Westminster show.

The Westminster Kennel Club Dog Show Presented by Purina will air on February 13 and 14 on the USA Network and CNBC. Click here for full viewing details.