Home ›
Our Pet Experts ›
Arden Moore ›
What Are the Chances of Finding My Lost Pet? ASPCA Survey Has the Answers

What Are the Chances of Finding My Lost Pet? ASPCA Survey Has the Answers 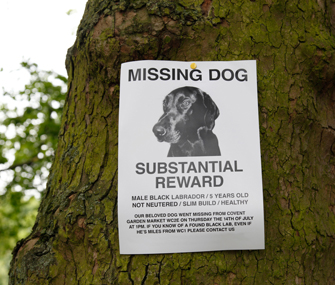 The results of what is believed to be the first published national study on lost pets may surprise you. The actual percentage of cats and dogs reported lost was lower than researchers expected, but the percentage of lost dogs safely returned to their homes was higher than they anticipated. “There were several surprises from our study,” reports Dr. Emily Weiss, a certified-applied animal behaviorist and vice president of shelter research and development for the American Society for the Prevention of Cruelty to Animals. “I think we have made an assumption about the stray pets in shelters — assuming that those animals are lost pets with owners that are actively seeking them. While some of those dogs and cats are in fact lost, many of them are likely to be dogs and cats that are truly homeless.”

The ASPCA conducted a survey of 1,015 pet households, and the findings of its five-year effort are published in the June 2012 issue of the journal Animals.

Among the key findings:

To better the odds of being reunited with their owners, Dr. Weiss advises that pets should be microchipped and wear identification collars with easy-to-read contact information.

Dr. Weiss urges owners to begin checking their area animal shelters the first day their pet goes missing. She also recommends bringing in a clear photo of the pet to help officials identify the cat or dog and possibly hasten the reunion.

The information from this study is expected to help ASPCA officials develop programs that may increase the likelihood of owners finding their lost pets.