Home ›
Our Pet Experts ›
Susan Segrest ›
What Is the Secret of the White House Holiday Decorations? Bo Obama Knows

What Is the Secret of the White House Holiday Decorations? Bo Obama Knows 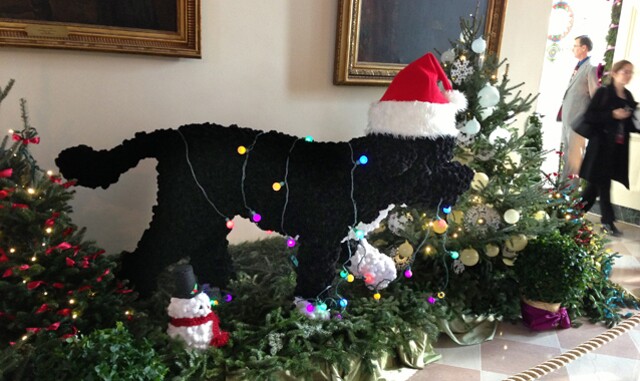 This life-size replicate of Bo was made out of 18,000 one-inch black pompoms and 2,000 white pompoms.

Every year the White House holiday decorations are a destination event as the 85 volunteers transform the president's home into a seasonal celebration. Vetstreet attended the media preview, and while there are many impressive elements — such as the decorations that were created to honor the Armed Forces — we are most entertained by the manifestations of first dog Bo’s presence throughout.

Decorating With the First Dog 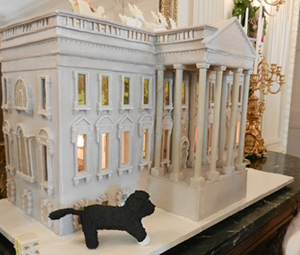 Susan Segrest, Vetstreet
A very large Bo is featured with the gingerbread house.

In the East Garden Room there is a life-size replica of the Portuguese Water Dog. A food sculpture of Bo is also featured outside the 300-pound gingerbread house located in the State Dining Hall. Though as first lady Michelle Obama noted at the event, the confectionery version of the first dog wasn’t exactly created to scale. “Bo is kind of big," she said. "That basically represents Bo’s standing in the house. He is almost as big as the house. He is such a huge personality.”

Kids Can Look for Bo

Mrs. Obama also explained Bo’s importance for young visitors. “We have a special activity prepared for the young people who visit the White House this year,” she said. “We thought it would be fun to give them a bookmark with a checklist that instructs them to find all the hidden Bo ornaments located in eight rooms of the White House. So it’s our version of Where’s Waldo?, but we will do that with Bo."

40: The number of Bo-themed ornaments — called “Bo-flakes” — that are located throughout the White House.

54: The number of live trees located along the visitor tour route.

175: The pounds of gingerbread used in creating the gingerbread house. They also used 50 pounds of chocolate to create the 300-pound house.

90,000: The number of visitors expected to tour the White House.