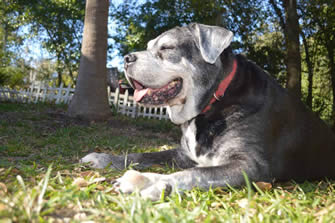 Sarah Vaughn’s dog, Floyd, went blind suddenly four years ago. “I was distraught," she says. "I thought this was the end.” Her reaction isn’t unusual. It’s upsetting to see a beloved pet confused, and most owners are entirely unprepared for how many routine activities are affected.

“The day that I completely lost it was when I took him to the vet and he wouldn’t get out of the car because he couldn’t see to jump down,” says Vaughn, who found herself unable to figure out how to get her 90-pound dog out of her vehicle.

But although Floyd was already 10 at the time, he recently celebrated his 14th birthday and is doing rather well. That wouldn’t surprise Jean Stiles, professor of ophthalmology at Purdue University College of Veterinary Medicine. When a client comes to her with a newly blind pet, reassurance is the first order of the day.

“The first thing I tell them is that the vast majority of dogs will adapt and learn to get around,” she says. “They are still going to be happy, wonderful pets, although they may go through a period of confusion and difficulty.”

Still, it’s a big transition for both dog and owner, so it’s reassuring to know what to do to help your pet, as well as what to expect.

Dogs are individuals and react in different ways to losing their sight. But for all of them, there are some things you should do at the start.

“The first thing is to keep the dog safe,” says Caroline Levin, author of Living With Blind Dogs. This may mean blocking off stairs or a swimming pool or putting cushioning around sharp things like the edge of a coffee table.

If your dog is crate trained, take advantage of safe downtime in the crate when you can’t supervise. If not, consider using baby gates to restrict him to a few rooms, or use what’s called an x-pen, which is a freestanding fence you can use to keep the dog in a limited area in the house.

“During this time when everyone’s adjusting, it makes life a little easier,” she says. “Give them a smaller space to map out at first, then extend it.”

Having a way to confine the dog at first can also help if the dog is having housetraining accidents, and it is especially helpful if you have more than one dog — you can separate them at feeding time if the sighted dog is stealing the blind one’s food.

As your dog is learning to find his way around, keep to a routine and try not to move furniture. Then, think about where to add tactile clues to identify important locations.

“If you have hardwood floors, put a stair runner at the top of the stairs that’s a cue to them that’s where the stairs start,” Levin says. You can also put bowls on a surface that feels different from the rest of the floor, and even try having a carpet runner or other distinct surface that leads to them.

Tactile cues can also help a dog avoid obstacles. Levin says some owners put down three or four feet of gravel or wood chips along the fence in their yard so the dog can feel the change from grass and knows when to stop. Levin also suggests trying inexpensive scents that you already have in the house, like vanilla extract, near important locations like the bowls and the door where the dog goes outside.

Take advantage of sound as well. It’s important to keep your dog active, and some may become reluctant to take walks, at least at first. Petra Burke of Kindred Spirits Dog Training had an Australian Shepherd, Kona, who went blind at 3 and lived to 13. “I always used noise to guide him,” she says. “I put a bell on my shoe when taking walks, clapped my hands to get his attention and did a lot of talking to him.”

Kona loved playing ball, even after he went blind. As the dog was losing his sight, Burke used a ball with flashing lights, which he could still see at night. “Then when he couldn’t see that any longer, I found balls that made noise as they rolled, and he loved those,” she says. “I would only throw it a couple of feet, but that was enough to make him happy.”

There is equipment you can buy or build that might help, but be sure it’ll work for your particular situation. Ramps and stairs, for instance, can help a dog get in and out of the car or on and off the bed, but Vaughn found that the stairs were too steep and small for her large dog.