What Zoos Do to Prepare for Natural Disasters 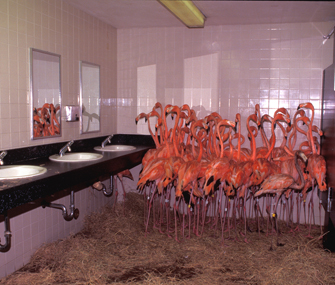 Photo by Ron Magill.
During Hurricane Andrew, Zoo Miami sheltered its flock of pink flamingos in a public bathroom.

Whether you're faced with a hurricane, blizzard or a sudden wildfire, pet owners should consider having emergency plans in place to protect their pets during natural disasters.

But what if you were responsible for hundreds of wild animals — and a category 4 hurricane was bearing down?

Emergency preparedness at a zoo involves a lot more than just a few gallons of bottled water and a full tank of gas. It takes knowledge of animal behavior, creative use of facilities, and a huge amount of human dedication.

Zoo animals aren't evacuated in advance of a storm, says Ron Magill, communications and media relations director at Zoo Miami. "These storms can change course at the last minute, so you may end up evacuating animals into the hurricane zone," he adds.

Plus, the stress associated with moving animals can lead to injuries and even death, so "shelter in place" is the best way to go. But while some animals are fairly secure staying where they're normally housed, others may need a temporary haven elsewhere on zoo grounds.

At Zoo Miami, for example, the flamingos normally inhabit large, open exhibits. During Hurricane Andrew in 1992, staff brainstormed the perfect emergency shelter for the tall waterfowl: the zoo's public bathrooms.

"They are big, concrete rooms with no windows," says Magill. "And they're all tile floors, so they're easy to clean, and the restroom provides fresh water for the birds."

Rounding Up the Troops (and Packs)

Once the immediate danger has passed, the first task for zookeepers is to canvass the grounds for escapees, since even the most secure structures can be damaged in a severe storm. And except for animals that can pose a danger to the public, most staff will not immediately chase and recapture loose critters because it's stressful — and often unnecessary because animals feel safe in their exhibits, seeing them as home.

"When startled, the animal may jump out," says Magill. "But as soon as they realize what they've done, they jump back in. We set food into the exhibits, and after a couple of days, they come back."

When routine care resumes, you're going to need food, so advance planning is critical. "The heart of the zoo is the walk-in fridge and the walk-in freezer — thousands of pounds of meat, fish, fruit and vegetables for over 2,000 animals," says Magill. "What happens when the power goes out?"

Zoo Miami had stockpiled food and had backup generators, but even the best-laid plans may not be enough — the storm destroyed the building that housed the supplies. So the zoo now also keeps refrigerated trucks stocked with backup food at least two counties away, so they're not likely to be hit at the same time.