Why a Labradoodle Might Be the Right Dog Breed for You 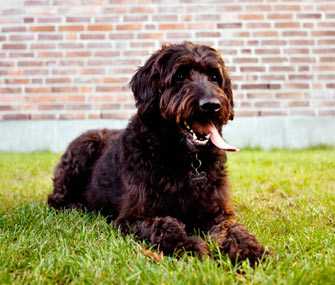 A cross between a Labrador Retriever and a Standard or Miniature Poodle, the Labradoodle can be a good companion for families who want a moderately active dog.

The Labradoodle, a cross between a Labrador Retriever and a Miniature or Standard Poodle, tends to be intelligent, friendly and at least moderately active, just like his parent breeds. Just keep in mind that designer dogs like the Labradoodle can be a bit of a genetic wild card — breeders never fully know what personality traits or physical characteristics will surface. Learn more about the Labradoodle and whether he might be the right dog for you.

They can be great companions.

Labradoodles tend to love their people and be devoted to their families. They’re generally sociable and tend to be affectionate.

They tend to be trainable.

Thanks to the Poodle’s intelligence and the Lab’s love of working with people, the Labradoodle is often smart and easy to train, particularly when you use positive reinforcement and reward him with praise, treats and play.

They can have different types of fur.

Some Labradoodles look like shaggy retrievers and others can resemble a Poodle with loose curls. Many fall somewhere in between the two. Plan to brush your Labradoodle every other day and have him clipped every 8 to 12 weeks.

They come in three sizes.

Labradoodles can be miniature, weighing 15 to 30 pounds; medium, weighing 30 to 45 pounds; orstandard, weighing 45 to more than 100 pounds. However, because Labradoodles are a crossbreed, there’s no guarantee that the puppy you take home will fall into the desired weight range.

They can be athletic.

Most Labradoodles have a moderate activity level, though larger Labradoodles may be more activethan their smaller brethren. They’ll probably appreciate a good walk and playtime every day and, if their health is good enough and their veterinarian gives the OK, they can enjoy participating in dog sports like agility, flyball, obedience and rally.