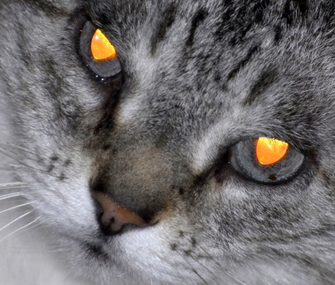 Your indoor tabby may look tame during the day, but his eyes may cast an eerie golden or ghoulish green glow at night.

For answers, we contacted two of the nation's leading veterinary ophthalmologists: Dr. Cynthia Powell, at Colorado State University, and Dr. Bill Miller, of the Animal Ophthalmology Clinic in Memphis, Tenn.

A Special Feature For Hunters

The feline eye is proportionately larger than the human eye and features a layer of highly reflective cells known as the tapetum lucidum. The larger eye size and the tapetum combine to enable a cat to see movement and objects better in dim light.

The tapetum lucidum, located between the optic nerve and the retina, operates like a mirror, reflecting the light and allowing the rods and cones another opportunity to pick up the limited amount of light available at night, Dr. Powell explains. This anatomical feature, which proves to be an asset for animals who do their best hunting at dawn and dusk, has been passed down to the domesticated cat from his ancestors.

“The eyes of these animals are geared for low-light vision," Dr. Miller says. "They include dogs, cats, cattle, deer, horses and ferrets. However, humans and primates do not have the tapetum lucidum, and neither do squirrels — because they're more active during the day, their retinas are designed for brighter light vision.”

The eyes of most cats tend to glow bright green, but Siamese often give off a bright yellow cast from their eyes. The specific glow color varies based on the animal and amount of zinc or riboflavin present in pigment cells within the tapetum lucidum.

“Zinc is a metal, and riboflavin is an amino acid, and both act as reflective agents,” Dr. Powell says. “Depending on how densely packed these cells are with zinc or riboflavin, the glow color can vary from animal to animal and breed to breed. In dogs and ferrets, the cells have zinc, but the cat cells have riboflavin.”

The Coat and Eye Color Factor

The animal’s age, as well as the color of his coat and eyes, can also influence this special luminescence, also known as eyeshine. “Age can change reflectivity as the lenses become denser," Dr. Powell says. "It decreases the animal’s ability to reflect light back out of the eye.”

Cats with white coats and blue eyes can give off a red-eye effect in dark settings. The red-eye look is due to blood vessels in the eyes reflecting light.

As for tips for reducing that ghoulish glow when using a camera flash, Dr. Powell has two suggestions: Try to take a photo looking more into the bottom of your cat’s eyes and not have his eyes looking up, or take two quick shots using the flash, which causes the pupils to restrict. Flash first to make the pupils small, and then quickly take another photo.

Plus: For more tips on avoiding eyeshine when taking pet photos, check out 5 Tips for Perfect Holiday Card Pet Snapshots.