Why Does My Cat... Eat Away From His Bowl? 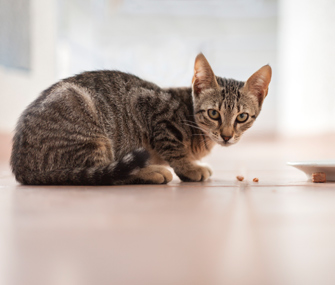 iStockphoto
Your cat may eat outside his food bowl, because it's an instinct passed down from his wild ancestors.

Does this sound familiar: You set your cat’s food dish down, but instead of making himself comfortable and digging in, he grabs a mouthful of his meal and carries it off to another area or even another room to enjoy it there. Then he comes back for more, again taking it away from his food dish.

You might be surprised to learn that your cat may be merely following in the paw prints of his wild cousins. The majority of cats, wild and domestic, are solitary hunters and eaters. Your cat may simply be obeying the instinct that tells him to eat in private, where other animals can’t intrude on his food or steal his meal.

Look at leopards, for instance. If you’ve ever been on safari — or simply watched an episode of Big Cat Week on Nat Geo Wild — you may have seen a leopard make a kill and then, after resting, drag his prey away and haul it up into a tree where he can dine on it at his leisure.

If it’s not something small that they can gulp down quickly, cheetahs also drag their kills to hiding spots before lions, leopards or hyenas snatch them away. That gives them a better chance to finish their meals in peace, not piecemeal.

Smaller wild cats, such as ocelots and margays, may also hide their food. They must protect not only their prey but also themselves from larger felines, such as jaguars and pumas, not to mention harpy eagles and other birds of prey.

In short, your cat knows that food can be not only a scarce resource but also a dangerous one that may attract larger predators. If he lives with other cats, even if they get along, his food-protective instinct may kick in, causing him to stash it away somewhere that seems safer. Or you may notice this behavior only if you’ve handed out a special treat, such as a sardine or a chicken liver. After all, cats don’t learn to share in kitty-garden. Finally, your cat may feel as if his food bowl is in an unprotected area that’s open to unexpected incursions from the family dog or a toddler.

To test whether this might be the case, try placing your cat’s dish in a more out-of-the-way spot. If you have multiple cats, place their bowls in separate areas instead of lining them up in a row. You might find that they are now less inclined to spread their food out over the house.