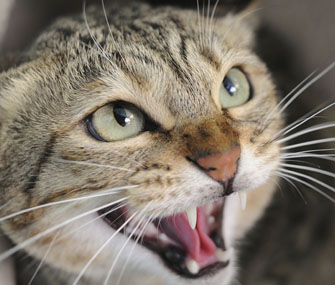 Picture a foreboding, hissing snake rising before you. Chances are that your reaction would be to back away — and that’s exactly the effect that your cat is going for when he hisses.

In fact, it's believed that feline hissing is a form of protective mimicry — an animal mimics a more dangerous creature to protect itself if it feels threatened.

Telltale Signs Something Is Wrong

When a cat channels his inner snake, he flattens his ears so that his head resembles the narrow head of a snake. At the same time, he exposes his fanglike teeth — adding some spit for good measure — while swishing his tail in a serpentine manner.

Although this is normal and happens occasionally in all felines, a hissing cat should not be taken lightly. It’s a warning that more aggressive behavior, such as biting or scratching, is coming if you don’t give him some space.

If your cat hisses a lot, especially when he's handled, it may indicate that he's in pain. So have your vet examine your kitty to rule out any underlying medical causes, such as arthritis or dental disease. Other conditions, such as hyperthyroidism and nervous system disorders, can also lead to hissing.

What May Be Causing The Hissing

If your veterinarian doesn't detect any medical problems, and you want to minimize the behavior, you need to determine what's causing your cat to have a hissy fit.

Some examples of why your cat may hiss at people and other pets:

Fear-induced aggression. Your cat may feel threatened by new people, noises or other changes in the household.

Redirected aggression. If your cat is interrupted when he’s in “territorial mode” while watching another cat outside, he may inadvertently hiss at you.

Asocial aggression. Cats who were not socialized properly as kittens may be fearful of people and pets.

Petting-induced aggression. A cat may hiss to indicate that he’s reached his threshold while being handled.

Inter-cat aggression. Although this type of aggression is often associated with male cats who haven't been neutered, any adult cat may bully others in the household over territorial conflicts.

Predatory aggression. Cats may view other pets in the household — birds, gerbils and guinea pigs — as prey and become agitated when they're near them.

Once you’ve determined what’s causing your cat to hiss, you can work with your veterinarian or a professional trainer to take steps to either avoid the triggers or reduce the underlying fear or aggression. With any luck, your cat will have nothing left to hiss about.