Why Does My Cat... Lick Her Wounds? 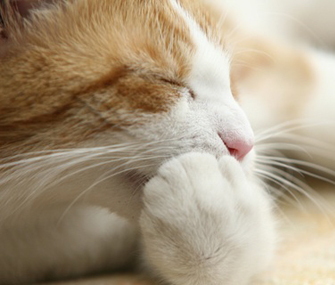 If you lacked opposable thumbs and didn’t have access to cleansers and disinfectants, you’d probably lick yourself clean after an injury, too.

That’s what cat tongues and saliva are designed to do — in part, anyway.

A cat’s tongue, which is gently barbed, is especially well suited to removing debris; canine tongues run a close second for their sheer surface area.

I've read that feline and canine saliva (ours, too!) also contains compounds that aid in healing:

All of those wonderful things in spit! Who knew?

Of course, licking isn't always a good thing. In many cases, pets let their tongues get the better of them. In fact, beyond brushing off big particles of dirt and imparting the occasional dose of saliva on a wound, cats' tongues are better off where they belong — in their mouths.

That’s because pets can get obsessed with licking to the detriment of healthy skin. There’s also a lot of bad bacteria in pet mouths, so as with so many good things in life, licking is an activity best done in moderation.

Sometimes it's hard to tell whether licking is getting out of control or just a normal feline drive, so here's a simple rule: If there's evidence of a wound, hair loss or even thinning of the fur, continual licking of the area is considered excessive. It goes without saying that any of these signs also require that you seek help from a veterinarian.