Home ›
Our Pet Experts ›
Linda Fiorella ›
Why Does My Cat... Like to Watch TV? 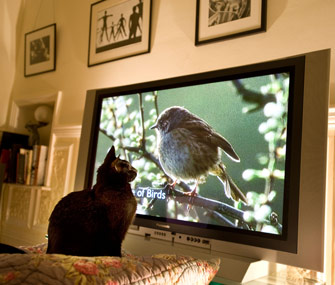 While cats are not yet counted as viewers in Nielsen ratings, it's not uncommon for some kitties to become engrossed in TV programming.

Dr. Jillian Orlando, DVM, a veterinary behavior resident at the North Carolina State University College of Veterinary Medicine, says that you’re more likely to find cats watching “the real-life soap opera” going on outside, but she acknowledges that there's also a feline audience for television.

Why Some Cats Take to the TV

A study of shelter cats exposed to TV found that some felines without access to windows might benefit from having a TV as a possible form of enrichment.

The cats in the study were shown a variety of images, and the most popular programs depicted birds, rodents and fish — natural prey for felines.

According to Dr. Orlando, there are several possible reasons why some kitties are more devoted fans than others. For one, television-watching cats may have a higher “prey drive, and are more likely to be attracted to the quick movements of objects across the screen,” says Dr. Orlando.

The TV screen may also just appeal to a cat who's bored. “Be sure that you have plenty of toys and window perches for your cat to choose from,” says Dr. Orlando.

What You Need to Watch For — When Your Kitty Watches TV

“It won’t hurt your kitty’s eyes, so you don’t have to tell Fluffy not to sit too close to the TV,” says Dr. Orlando.

But if your cat becomes too engrossed in the plot and tries to go after a critter on the telly, your kitty or your flat-screen TV could get hurt.

“If your cat is really intent on 'hunting' the television, don’t let her watch the TV unsupervised. And if you have a large flat screen, mount it to the wall, in case kitty decides to take the leap,” warns Dr. Orlando.

It's also a good idea to interact with a cat who's focused on a show, especially since felines may become frustrated when their instincts to catch prey are thwarted.

“Try to distract your kitty by giving her a toy before trying to ‘catch’ things on screen,” says Dr. Orlando. “You definitely don’t want to encourage the kitty to go after the mouse on television, as cute as it may be.”