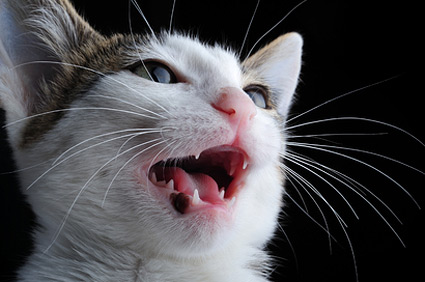 If you’ve ever lived with a vocal cat, you’ve almost certainly asked yourself this question. After all, who could resist wanting to know what your feline friend is thinking as she meows plaintively at your sleeping face early in the morning or weaves her way between your legs while crying herself hoarse?

Most of the typical in-the-wild feline sounds—like hissing, spitting, growling, and that hair-raising high-pitched screaming thing cats do when they’re fighting and mating—are self-explanatory: They’re angry, scared, or hoping to impress. But the plain-old “meow” can seem confusing to us humans.

Behaviorists say that cats meow at humans because they want something and, most important, because meowing gets results.

And that’s undeniably true. Meowing works. But why?

Interestingly, some experts say that the sound “meow,” as we know it, developed at least in part because we humans associate it with the needy cry of an infant. But it’s also undeniable that kittens meow when they want something. So it’s no stretch to assume cats didn’t learn to associate meows with requests.

But cats can meow at varying frequencies, pitches, tones, volumes, and lengths. A meow imploring you to open the back door, for example, can sound completely different from the excited, “I’m about to be fed” meow, which is totally different from the meow that happens right before you scratch her right behind her ear at bedtime.

As anyone who’s ever heard two different cats meow knows, no two feline voices are ever exactly the same. But beyond the vagaries of voice box machinery, most of the variation comes from the cat’s own personality. And there’s no predicting how the interaction of any given human-cat personality pairing will affect meowing. After all, when some cats learn that meowing brings them satisfaction, the very act of meowing can become satisfactory in its own right.

So what do you do when the vocal requests get continuous or turn into an obsessive, repetitive behavior? It’s always a good idea to take kitty to the veterinarian’s office to make sure nothing is awry. If the veterinarian doesn’t find any physical problem, you may want to seek out a certified animal behaviorist or a board-certified veterinary behaviorist to get the answer you need.

But rest assured, the vast majority of vocal cats are not pathologically afflicted. Quite the opposite, most are simply voicing their healthy demands—pleasurably.