Home ›
Our Pet Experts ›
Linda Fiorella ›
Why Does My Cat... Roll Around on His Back?

Why Does My Cat... Roll Around on His Back? 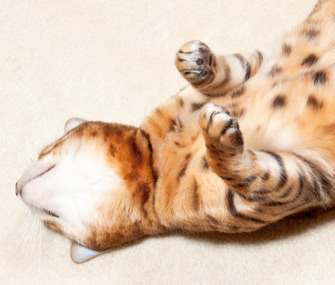 Cats often get unfairly labeled as lazy and aloof when, in fact, they can be quite expressive and frisky, even though their actions can at times seem perplexing. Take the twisting gyrations some cats perform on their backs. Catnip could be one culprit, but there are also other reasons your kitty might do this shimmy.

Some other explanations include employing a little back-scratch fever for an out-of-the-way itch, and if the kitty in question is an unspayed female, this is common post-coital behavior. Plus, some cats simply enjoy it. “When humans need a stretch, we do a good stretch, and that helps us feel good,” says Dr. Sharon Crowell-Davis, DVM, DACVB, professor in the College of Veterinary Medicine at the University of Georgia.“And some cats just seem to enjoy rolling around on their back. It's a pleasurable thing.”

Two other explanations for this behavior “seem quite opposite,” Dr. Crowell-Davis says. “It can be a way of showing submission, and it can also be a way of inviting play.” The invitation to play can extend beyond fellow felines, too. “We just need to ‘get it’ and realize it's time to ... start throwing the stuffed mouse for them. They’re basically saying, ‘Hey, play with me.'”

In some cases, the behavior starts out because of one reason, such as an itchy back, and then the cat learns that it's also a new means of getting attention in general. The owner thinks the twisting tummy of their kitty is irresistibly cute and reaches down and gives the cat some attention. If the cat enjoys the attention, he will likely repeat that behavior. Dr. Crowell-Davis says two of her cats do this, and one in particular has learned the lesson well. “If I’m not paying quite enough attention, she will walk in front of me and look up at me and then throw herself down on her back and wiggle,” she says. “That's her signal that ‘Hey, you’re neglecting me! Give me some attention!’”

Read more articles in the Vetstreet series "Why Does My Cat..."