Why Does My Cat... Stick Her Butt in My Face? 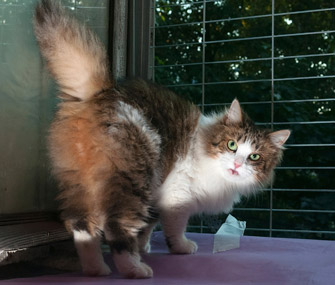 The answer to the question, "Why does my cat stick her butt in my face?" is that cats communicate in many ways. The various forms of feline communication include visual, auditory, olfactory and tactile cues. Why your kitty likes to stick her behind in your face is perhaps a combination of several of these forms.

Visual communication is performed via body language. The position of a cat’s ears, head, tail and body all convey a message to other cats and to owners as well. For example, crouching down, flattening the ears and drawing the head toward the shoulders are universal signals that a cat does not want to engage further with other cats — or with you. Direct eye contact, standing tall and piloerection — which is the scientific term for puffing out the fur — are signs that the cat is ready to escalate into an aggressive confrontation.

On the other hand, a tail that is held vertically in an upright position while your cat is also calmly gazing and blinking at you is generally associated with friendly behavior. Many times we miss our cat’s subtle body language due to their smaller features compared to dogs. Sometimes the signaling occurs so quickly and the changes are so rapid that we simply don't see them.

Almost everyone has heard cats communicate vocally. Meows, trills, chirps, hisses, yowls and purrs are some of the ways our cats indicate how they are feeling to us as well as other cats. Cats also have various means of olfactory (scent) communication. When we think of cats and marking, we usually think of urine spraying. Yes, cats do mark using their urine, and sometimes feces can be used for marking as well. However, most people overlook the fact that their cats are also marking when they rub parts of their bodies on other cats, humans or objects in the house.

Kitties leave a chemical signature when they rub objects with their heads, ears and tails. When cats scratch on items, they can also leave a scent trail through their interdigital glands, which are located between the pads of their paws. Other glands that contribute to marking are located at the corners of the mouth, the sides of the head and under the chin and ears. There are also glands at the base of the tail and along the tail that can deposit odors.

READ MORE: Cats, Cat Behavior, Behavior, Why Does My Cat

READ MORE: Cats, Cat Behavior, Behavior, Why Does My Cat