Home ›
Our Pet Experts ›
Linda Fiorella ›
Why Does My Dog... Like to Stick His Head Out the Car Window?

Why Does My Dog... Like to Stick His Head Out the Car Window? 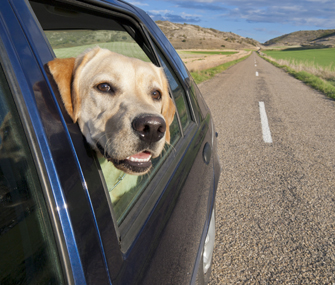 Anyone who's been in a convertible with the top down can relate to the look of happiness on a dog who's peering out a car window, his ears rippling in the wind.

Despite the obvious dangers involved, it can be hard to deny such joy to your pet. But what makes car windsurfing so appealing to dogs in the first place? And just how dangerous is it?

Dr. Kelly Moffat, a board-certified veterinary behaviorist andmedical director of the VCA Mesa Animal Hospital, offers a few theories on why some dogs relish sticking their heads out of vehicle windows.

“First and foremost, they like it! Simple as that,” Dr. Moffat says, adding that “putting their head out the window gets them closer to all the exciting happenings outside of the car.”

According to Dr. Moffat, things like a wider view of the passing scenery and increased accessibility to enticing scents outside the moving vehicle can be irresistible to an animal whose sense of smell is so much more sensitive than ours.

Dr. Moffat adds that, contrary to popular belief, not all dogs enjoy riding in cars with their heads out the window. “These dogs may have motion sickness," she says. "Or they may be fearful of the car and the motions and sounds associated with the drive.”

The Dangers to Your Dog

If your dog is one of those pups who can't wait for you to roll down the window, Dr. Moffat offers this stern warning: “The dangers can include a dog jumping out the window or rolling the window up on himself, as well as eye injuries from flying debris, such as stones and dirt.”

Dr. Moffat stresses that dogs should always be properly restrained, either in a crate or with a pet seat-belt harness, whenever they're in a moving vehicle — even if the windows are up. “The driver doesn't need to have a pet crawling in their lap, nor should the pet be launching itself from the back to the front, running back and forth on the back seat, getting under the gas pedal or accidentally rolling that window down,” she says.

If you can’t resist allowing your dog some of the thrill of a breezy drive, Dr. Moffat suggests having someone sit with a seat belt-restrained dog in the back seat, while you drive the car slowly through the neighborhood.“But once you're on major streets and driving over 25 mph, the dog should be in a seat belt for safety,” she says.