Home ›
Our Pet Experts ›
Mikkel Becker ›
Why Does My Dog... Look Guilty?

Why Does My Dog... Look Guilty? 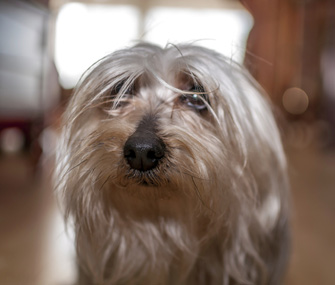 Thinkstock
Your dog might look guilty after he's done something wrong, but he's probably just reacting to your response.

We often assume that our dogs feel guilty because of the way they act when we catch them doing something they’re not supposed to do. This guilty look — which we are all familiar with from various Internet memes — is frequently perceived as a canine acknowledgement of wrongdoing or as an expression of remorse. But in reality, your dog’s guilty look means something vastly different.

A dog’s posturing may translate as “guilty” because of the lowered, insecure movements reminiscent of how a human may act when feeling ashamed and repentant. The “guilty” dog may squint his eyes and blink more frequently. He may also avoid eye contact or lower his head and look at you with the whites of his eyes exposed.

He may press his ears back, closer to his head. He may lick his lips and yawn, lower his tail and sink to the ground in a cowering motion. He may also turn away from the scene of the crime, as though he’s so embarrassed by what he’s done that he cannot face the aftermath.

But your dog’s guilty look may not indicate guilt at all; instead, it is most likely a reaction to a human’s upset or angry response. Two studies, one led by Alexandra Horowitz and the other by Julie Hecht, found that when a dog is confronted by an angry or upset owner, he is more likely to present the guilty look, independent of actual guilt or innocence.


In Horowitz’s study, a treat was placed in front of a dog. The dog’s owner commanded him not to eat it and then left the room. Horowitz gave some dogs treats but not others. “In some trials the owners were told that their dog had eaten the forbidden treat; in others, they were told their dog had behaved properly and left the treat alone,” ScienceDaily reported in 2009. The owners were not necessarily told the truth about whether their dogs had eaten the treats or not.

Hecht’s study was similar: Participating dogs were left alone with a table of food that they were told was off limits. Some dogs ate the food, while others ignored it. Hecht and her colleagues then watched how the dogs greeted their owners when they returned to the room. “We found no difference in the greetings between dogs that ate the food and dogs that did not,” she wrote in a 2014 essay for The Dodo. “Nor were owners able to tell whether their dogs had eaten the food in their absence.”

In both studies, the dogs’ guilty reactions were unrelated to their actions. Horowitz concluded that the dogs’ behavior was directly tied to their owners' reactions to the situation. In other words, the condition that evoked the guilty response was not a dog’s understanding of his wrongdoing but rather the knowledge that he was being scolded or reprimanded by his owner.