Home ›
Our Pet Experts ›
Linda Fiorella ›
Why Does My Dog... Point? 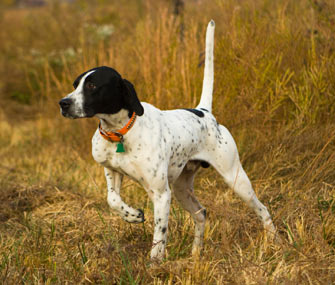 The act of pointing — a dog becoming motionless with his snout toward an object — is normally associated with dogs who are bred and trained for hunting. Hundreds of years ago, the first of these dogs were bred in Europe to sniff out birds and then “freeze.” Holding the pointing position told hunters where to throw their nets and capture the prey. Because most dogs chase birds, a dog with the ability to stop in the presence of a plump partridge still proves invaluable to hunters today. But hunting breeds aren’t the only ones who will point, so don’t be surprised if you see this behavior in your pup.

What does a “point” look like? “The classical point is a dog very intense, standing motionless, with the nose thrust forward at the strongest scent, with one front foot bent up and tail (if it has one) directed toward the sky,” says Dr. Lesley Birmingham, DVM, a retired private practitioner in Maine with 40 years of experience with hunting dogs.

While the point of a well-trained dog is graceful in its precision and control, it takes months of training to look that effortless and regular practice to maintain the skill. Certain breeds lend themselves to learning how to point like a pro, and within the pointers, some breeds’ talents lend themselves to specific hunts, explains Dr. Birmingham. “If you hunt game such as Hungarian Partridge or Sharptail Grouse in big open spaces, you need a ‘big-going’ dog that can physically handle running long distances, such as the English Pointer or Setter,” he says. “If you are hunting Grouse in thick woods, on the other hand, you might choose a Brittany, German Shorthaired Pointer or Wirehair.”

Even if your dog isn’t a hunting breed, you might see him pointing. Dr. Ellen M. Vindell, VMD of Veterinary Behavior Consultations in Pleasant Valley, N.Y., says that dogs by their very nature and biology are capable of spontaneously exhibiting many of the behaviors prized by breeders. After all, “dogs are just dogs, and there are certain behaviors that probably any dog that’s a dog can do,” says Dr. Lindell. “They’re anatomically equipped to [act that way].” Even dogs bred and trained for one trait can often exhibit other talents. “You’ll see a sporting dog who circles like a herding dog, and you’ll get some herding dogs who point,” she adds.

So, while their stances may be amateurish compared to trained pointers, it’s definitely not unusual for a dog who is not from a breed associated with pointing to point, either because this may be a behavior that just naturally appears in dogs or because somewhere in the dog’s heritage there was a pointing breed like a Brittany Spaniel or an English Pointer.

Getting to the Point

If you’re interested in teaching your pup to point, any behavior can be taught and reinforced with enough time and effort, even with dogs who don’t show an aptitude — although in that case, the teaching could be more tedious. “It’s just a question of if you want to,” Dr. Lindell says.

Dr. Birmingham agrees. He has personal experience with his own Golden Retriever, Marley, who points when she sees squirrels. “Any dog could be trained to point (freeze) with the right trainer and unlimited time,” he says. “It is just a lot easier and quicker if a dog has been bred for this trait.”

Even within pointing breeds, all pointers are not created equal. “The instinct from breeding varies from dog to dog, and training can improve those abilities with time,” Dr. Birmingham says. The main thing that sets a good pointer apart for hunters is the dog’s ability to hold the position as long as the hunter needs him to. “You want a dog that will hold the point until the hunter gets in position to shoot and flushes the bird,” says Dr. Birmingham, who stresses that ideally the dog should remain on point, even after the shot, to follow the bird visually and prepare to fetch when given that command.

While a hunting pointer’s activities are at least intended to lead to a beneficial and feathery conclusion, with a pet dog who practices pointing, the value of the behavior for the dog and owner could be limited, says Dr. Lindell. “Unlike running and chasing, I don’t recall having ever seen a dog in my practice and thought, My gosh! He never gets to point!”