Home ›
Our Pet Experts ›
Denise Maher ›
Why Does My Dog... Push Around His Bowl?

Why Does My Dog... Push Around His Bowl? 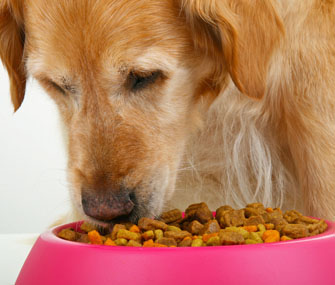 According to Dr. Leslie Larson Cooper, DVM, DACVB, a veterinary behaviorist based in San Francisco, most canine behavior surrounding food is easily reinforced and repeated.

Here’s how the bowl nudging habit often starts: A dog in a playful mood paws at his dish or pushes it around with his nose as a way to explore his environment. His owner notices the behavior and reacts by giving him attention or putting food in his bowl, which only encourages the dog to repeat the rewarding behavior.

Is Nosing a Bowl Normal?

Bowl play is typically a harmless habit. If you want to put an end to the behavior, use a heavier bowl that’s difficult to nudge or remove the bowl from your dog's reach when it’s not mealtime.

Signs of a Medical Problem

In some rare cases, strange food-related behaviors can be cause for concern. Take a moment to assess the bigger picture and ask yourself some key questions: Did the behavior surface suddenly? Is he not eating normally? Are there any other unusual behaviors that started around the same time? For example, a dog may bat at his bowl because he’s lost his appetite due to illness, which calls for an immediate visit to the vet.

What You Can Do

Most often, playing with a food bowl is nothing to worry about. But if you want to discuss the behavior with your vet, consider filming your dog. Observing the act in context — possibly along with other telling actions — may help your vet figure out if it’s just a quirk or a sign of something bigger. For instance, issues with food and water bowls can potentially be caused by vision problems.

Dr. Cooper advises owners to speak first with their primary health care provider to rule out any medical issues. In extreme cases, if your vet suspects that the habit is rooted in a behavioral problem, she can then recommend a veterinary behaviorist affiliated with the American College of Veterinary Behaviorists or the American Veterinary Society of Animal Behavior.