Why Does My Dog... Shake His Head All of the Time? 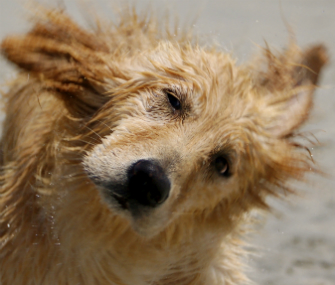 While some dogs may seem to just like the sound of their ID tags jangling against one another, most dogs shake their heads because their ears are bothering them.

Without fingers and thumbs to massage their own ears, it’s simply the next best thing.

If you notice that your dog is shaking his head more than usual, it’s time for a trip to the veterinarian.

A common cause for head shaking is otitis externa, an inflammation of the external ear canal. While ear mites, wax plugs, grass awns and other factors can cause the behavior, in most cases, there’s an underlying allergy at work.

Once the ear canal is inflamed, bacteria and yeast can invade the area because moist, dark places are exactly where they like to hang out.

In addition to head shaking, dogs with otitis may have red and swollen ears. Your dog may moan with relief when you rub his ears, or yelp in pain from a light touch.

If there’s a secondary infection, you may notice some discharge in the ears — and even a nasty scent wafting from inside the ear canal.

Some breeds, like Dachshunds and Jack Russell Terriers, are susceptible to ear vasculitis, an inflammation of the vessels in the pinna or ear flap.

It’s believed that the condition is caused by an immune disorder, frostbite or fly bites, but other environmental factors may also be partly to blame.

The problem usually starts with a thickening of the outside margins of the ears, which eventually become ulcerated and crust over. Dogs with these lesions may shake their heads, causing the scabs to break open and bleed.

Sometimes all that head shaking can actually create problems. When tender ears slap against the hard skull, blood vessels within the pinna can break open, forming a pocket of blood known as a hematoma. This firm lump just under the skin will often lead to even more head shaking.

If your dog is shaking his head more than usual, make an appointment to see your vet. With the correct diagnosis, she can provide the best treatment to relieve the irritation, which may require your pet to wear an Elizabethan collar for a week or two. It’s a small price to pay for a more comfortable and relaxed dog.