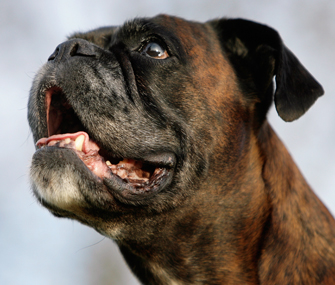 Nothing gets a dog owner’s attention like 42 canine teeth "biting" at the air in front of him.

If those teeth are attached to a playful pup, getting your attention may be precisely his goal.

A dog who's feeling anxious may also snap at the air as a warning. Typically, he’ll appear tense — hair standing on end — and snap as a way of saying, “Back off, I’m feeling threatened.” If you continue to approach, chances are that the next snap will bite down on more than just air.

When It Could Be a Medical or Behavior Issue

If a dog snaps at the air, and he's not feeling playful or threatened, it may be an indication of a neurological or behavior problem.

Some people use the terms “fly biting” or “fly catching” to describe canines who appear to be nipping at an invisible fly, instead of directing their snapping and licking at a person. Repeated episodes of fly catching may be a sign of seizure activity, which can often be controlled through medication.

Other dogs air snap out of boredom, if they don’t get enough exercise or stimulating play. This can turn into an obsessive-compulsive disorder. Additional exercise and food puzzles may help to eliminate the behavior, but medication may be needed for severe cases.

If you’re not sure why your dog is snapping at the air, consult your veterinarian. If it's associated with aggression, you’ll want to work with your vet or a certified trainer to resolve the problem as soon as possible — and nip that behavior in the bud.