Home ›
Our Pet Experts ›
Dr. Mary Fuller ›
Why Does My Dog… Sniff Only Certain People?

Why Does My Dog… Sniff Only Certain People? 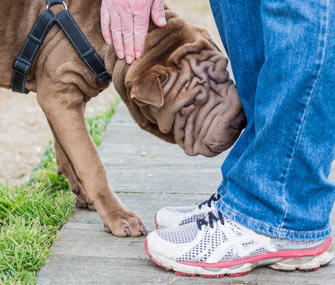 Thinkstock
When your dog seems particularly interested in one person's scent, is he smelling other animals on the person? Or is it something else?

We’ve all been there: When walking down the street, our pooch will suddenly be very interested in investigating a random stranger, but a minute later, the dog is uninterested in the human who wants to pet him. And so it goes with visitors to the house, people at the vet’s office and other dog owners at the park. And it often seems as if there is no rhyme or reason as to why a dog can’t resist sniffing one person but ignores another.

So what’s going on? Here are a few theories.

When you entertain guests, does your dog make a beeline for one guest in particular? Does his nose sweep back and forth like a vacuum nozzle—and not always in the most, ahem, polite location? If so, yourdog is using his nose to get acquainted. And just as you’re drawn to certain people because they’re more interesting, some people are more fascinatingto your dogfrom a scent standpoint than others are.


Instead of trotting out the usual introductory queries like, “How many brothers and sisters do you have?” and “What do you do for a living?” dogs can, with a single whiff, unearth very personal information about someone. They may be able to detect, for example, what a person had for lunch hours ago or that someone owns three cats, two dogs and walked in the woods yesterday.

In fact, according to Alexandra Horowitz, a canine cognition specialist at Barnard College and author of Inside of a Dog: What Dogs See, Smell, and Know, a dog’s sense of smell is so discriminating that it could detect a teaspoon of sugar in a million gallons of water.

So depending on what appeals to your dog, he could simply be drawn to the smell of someone’s cat or dog on that person's clothes, or it may be that, on some undetectable-to-you level, the person smells like his favorite treat.

Some dogs have a knack for sidling up to the people who are most fearful of dogs. Is it something in the way these people smell?

Maybe. It could be that fear causes people to sweat a bit more, and dogs pick up on that scent, but they’re probably also reading subtleties in a person’s body language. Oritmay be acombination of the two that seems to attract your dog to the people who least want his attention.

3. The Dog Is Just Happy to See Someone.

New research shows there may be plenty going on inside a dog’s head when he uses his nose.


In a study published in the journal Behavioural Processes, unsedated dogs underwent functional magnetic resonance imaging while presented with five scents: a familiar human, an unfamiliar human, a familiar dog, a strange dog and the dog’s own odor. The results? The area of the brain associated with pleasure lit up most when the dog was presented with the scent of a familiar human. And even in the absence of the familiar person, dogs were ablenot onlyto distinguish that person’s scent, but also had positive associations with it.

The bottom line? Even if we don’t know exactly what the average dog is focusing on as he says hello to people on the street, he clearly knows what he likes — and he’s usually not shy about letting everyone else know, too.

READ MORE: Dogs, Dog Behavior, Why Does My Dog

READ MORE: Dogs, Dog Behavior, Why Does My Dog