Home ›
Our Pet Experts ›
Colleen Oakley ›
Why Does My Dog... Thrash His Toys?

Why Does My Dog... Thrash His Toys? 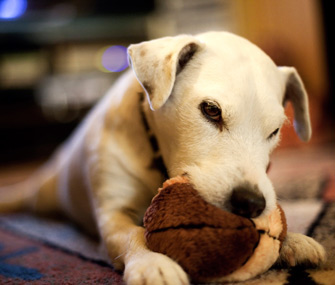 If you own a dog, you’ve no doubt witnessed it a million times: Fido picks up his favorite squeaky toy, and then proceeds to shake it as hard as he can from side to side.

The Story Behind the Behavior

Simply put, this is killing behavior, says Dr. Margaret Gruen, a clinician at the NC State University Animal Behavior Service. “Evolutionarily speaking, that motion is how dogs would capture and kill their prey — by grabbing and shaking very hard,” explains Dr. Gruen.

But there's no need to worry. Really! Although the action is instinctual, it doesn’t actually mean that your pup is in murder mode. For domesticated dogs, it’s an element of play.

“They like the tactile stimulation of the toy hitting the sides of their face,” says Dr. Gruen. “It’s just another part of exuberant play.”

Thrashing is also typically part of another fun canine pastime — tug. And while a lot of dogs may growl and act menacing when someone tries to wrestle a toy out of their mouths, several studies have found that games of tug don't make pups aggressive. However, exuberant play can get out of hand, and even the friendliest canines may inadvertently bite out of sheer excitement.

How to Safely Play With Your Pup

Obviously, any dog who growls should be approached with caution, since it can be hard to tell whether the growling is playful or a warning sign. When in doubt, it’s better to be safe than sorry.

Dr. Gruen stresses that you need to be the one to both initiate and end a play session, so that it's not only structured but you're the one in charge.

And like any good parent, let your dog triumph from time to time. “Some people believe that owners need to win every game of tug in order to establish dominance, but that’s actually not the case,” says Dr. Gruen.

For your dog’s safety, make sure that you're playing with soft, plush toys. “Chewing on hard toys and tennis balls can wear away at their teeth,” adds Dr. Gruen.