Home ›
Our Pet Experts ›
Dr. Sharon Crowell-Davis ›
Why Does My… Old Cat Hate My New Cat?

Why Does My… Old Cat Hate My New Cat? 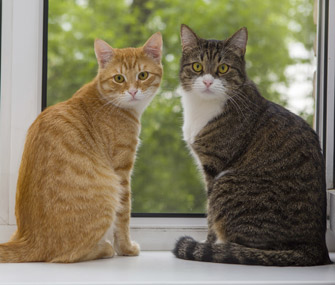 If you already have one or more cats and you bring a new cat home, the reaction of your old (or resident cat or cats), may simply be to avoid the new cat. Or, the situation may quickly escalate to one in which your cat is hissing and growling at the newcomer with his hair standing on end, or even flat out attacking the new cat. We humans tend to interpret such dramatic behaviors as hate and become discouraged that our old and new cats will ever get along, but it’s important to realize that this is not necessarily the case.

Cats are Often Fearful of Other Cats

To better understand this behavior, let’s take a look at how domestic cats interact in the wild. In a feral state, cats live in social groups and know who is a member of their group. Members of the group often help each other. For example, if a big, male cat who is a stranger approaches, he may be considered a danger to any youngsters in the group, since non-group males have been known to kill kittens if they can get to them. Both the Queens (the mother cats) and the Toms (male cats) who are members of the group may attack the strange male to defend the kittens. If the new male wants to become a member of the group, it will likely require weeks or months of his peaceably and patiently hanging around the periphery of the group’s area. He will have to gradually interact with the adults and show that he is not a danger to the group’s well-being before he has a chance of being accepted as a member.

When you bring a new cat into your home environment, your existing cat or cats may behave in a similar way. They will likely regard the new cat as a stranger and not as a member of the family. This is normal. They don’t hate the new cat — they are simply scared of him and need time to learn that the new cat is not a danger. There are definitely some basic principles that should be followed when introducing one cat to another, such as keeping them separated at first, allowing adequate time for them to become used to each other’s scent and presence, and making sure each cat has adequate food, litter box and hiding places to help avoid conflict.

Sometimes, even when you have followed all the appropriate introduction techniques outlined in the links above, your resident cat may still act frightened of your new cat, even weeks later. One common reason for this is that the resident cat perhaps hasn’t seen another cat for a long time. Cats that have lived by themselves for long periods simply may need some time to get used to the presence of another cat. Another reason is that, as a kitten, your cat may have missed out on learning cat etiquette from socially adept adult cats during important periods of socialization. These periods for kittens peak at 2 to 7 weeks of age, but the weeks from 8 to 16 weeks are also an important time. If your resident cat was not properly socialized to his or her own species when young, or hasn’t seen another cat in a long time, it may take longer until he or she is comfortable with the new cat.

Even with a lot of time and careful exposure, two cats may still not get along. Sometimes, it is a matter of personality. Just like humans, each cat is a unique individual and has individual preferences. Some humans may like or dislike certain other humans, and this issue can also occur between cats. If that seems to be the situation, then your ultimate goal for your cats needs to be non-aggressive tolerance of each other. If you have two cats who really don’t like each other for whatever reason, they may never cuddle and groom each other. But, it is a reasonable goal for them to be able to be in the same room together and not fight. If you are having a persistent problem with two or more cats not getting along, talk to your veterinarian, who can either help you directly or give you the name of cat behaviorists in your area who can provide additional assistance. If the cats are actually fighting, they need to be kept physically separated until the owner can obtain professional help.