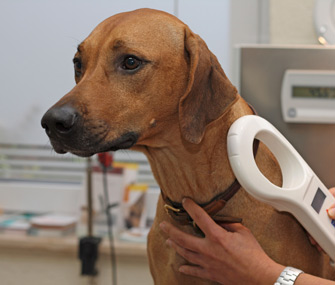 Once upon a time, a license tag was the only option for identifying your dog. Unfortunately, tags and collars can fall off, or be taken off, leaving your pet without identification. The solution for many years was a tattoo, either on the dog's inside ear flap or the abdomen. Unfortunately, tattoos sometimes faded and could be hard to see at all on dark-skinned dogs. In addition, nobody could agree on what to tattoo. Most people registered their tattoos with a national service that kept track of lost and found tattooed dogs, but people who found tattooed dogs often had no idea what the tattoo meant or who to contact.

How Does a Microchip Work?

Now microchips have largely taken the place of tattoos. Microchips are tiny radio-frequency identification (RFID) chips, about the size of a grain of rice. Your veterinarian implants the chip using what looks much like a big hypodermic needle. The chip is placed under the dog's skin on the back, between the shoulder blades. Most dogs do not even react during the process, which is much like getting a vaccination. The cost generally includes implantation as well as registration, and discounts may be available for multiple pets.

You must register the chip number with the company that makes the chip, so that if your dog is found, he can be traced back to you. A chip doesn't take the place of a license tag, which anyone can read. The chip must be read using a special scanner, which most veterinarians and shelters own. At one time, scanners were chip-specific, with chips from different manufacturers requiring separate scanners. But now universal scanners can read all modern chip types. The scanner is passed over the dog's back and sides, and the chip, if present, will transmit the chip's identification number to the scanner. The rescuer then contacts the national database, which in turn contacts the dog's owner. Recent reports estimate that more than 600,000 dogs have been reunited with their owners through their chips. Not only are chips valuable for returning lost dogs but also for proving ownership.