Home ›
Our Pet Experts ›
Dr. Patty Khuly ›
Why My Brachycephalic Dog Is Such a Snore!

Why My Brachycephalic Dog Is Such a Snore! 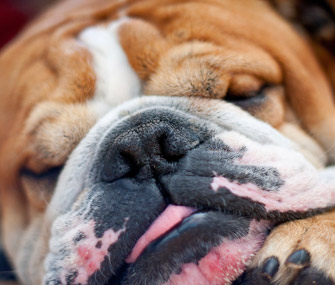 Does your dog snore? My Vincent does. Like a train. All night long. Vincent is a French Bulldog. As such, he’s considered brachycephalic (short-headed). Which leads him to snore so much, in fact, that if I happen to fall asleep in his company, I’m sure to suffer more than a titch of insomnia. And between these bouts of unwelcome wakefulness, it’ll be his rasping breath and sputtering gags that’ll punctuate my dreams long into the remainder of the night.

I know I’m by no means alone. The reality of dog snoring is one reason many human sleep specialists condemn the practice of bed sharing among humans and animals. Their contention is that people who suffer sleep disorders are less likely to get their allotted amount if they’re being assaulted by the sounds of a canine snorer (among other insomnia-inducing behaviors).

But this post isn’t about our human discomforts. It’s all about them. Because if their snoring is bad for us… what must they be feeling?

The Side Effects of Snoring

Indeed, we assume that most dogs who snore suffer from a variety of uncomfortable conditions.

Consider sleep apnea, for instance: Research out of the University of Pennsylvania using English Bulldogs as a model for human sleep apnea offers convincing evidence that snoring is a problem for this breed. It stands to reason that the same could be said for many dogs whose upper respiratory conformation is similarly deformed.

Here’s an excerpt from the abstract:

“To establish a natural model of sleep-disordered breathing, we investigated respiration during wakefulness and sleep in the English Bulldog. This breed is characterized by an abnormal upper airway anatomy… during sleep, the animals had disordered respiration and episodes of [significantly reduced blood oxygen levels]. In contrast, dogs [with normal airway anatomy] never [experienced similar episodes].”

As a direct result of this sleep disorder, dogs presumably confront the same issues similarly afflicted humans do. In other words, not only could they be at risk of life-threatening respiratory compromise during what should be restful sleep episodes, we have to assume they may also be at risk of the following:

Problems During the Daylight Hours

But abnormal airways can impact more than just sleep patterns. These dogs are most likely experiencing some degree of respiratory compromise that affects the entire course of their waking lives too.

Consider how dogs regulate their body temperature during exercise. Instead of the sweat mechanism humans employ, dogs primarily enlist their tongue and airway as a cooling mechanism. Cool air tempers the heat of the blood that courses through the many vessels of the tongue and respiratory tract.

So think of it this way: Dogs who are unable to move air efficiently are not only more likely to suffer heat stress, they’re also less likely to move enough air into their bodies to oxygenate their blood efficiently. Hence, it’s not just sleep and oxygen deprivation at night, these dogs probably endure chronic fatigue and exercise intolerance at all hours of the day too.