Home ›
Our Pet Experts ›
Why Play Is Important for Puppies

Why Play Is Important for Puppies 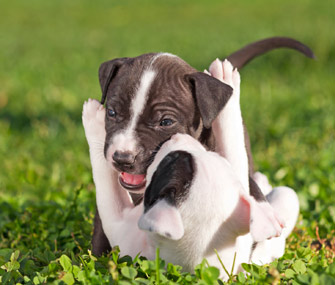 Besides being fun for both you and your dog, play serves an important role in preparing your puppy for life as an adult. Play helps him develop social and physical skills that he'll need for the rest of his life.

How Puppies Play in Their First Year

Puppies start to play with their mother and littermates between 2 and 4 weeks of age. Play with littermates is very important for learning social skills. Puppies play with each other by play fighting, and often bite one another (or their mother) too hard. When this happens the recipient squeals, and if the biter doesn't stop, the bite recipient will refuse to continue playing. This teaches the puppy important communication and bite-inhibition skills, and is one reason puppies should not be separated from their litter before 7 weeks of age. If a puppy is separated earlier, you need to try to find a young playmate for him, or assume the role yourself. If the puppy bites too hard, yell "ouch!" and refuse to play if he continues.

Puppies begin to play with objects at between 4 and 5 weeks. It's important to introduce balls and other toys and safe objects to puppies during this period, since puppies learn specific play habits at an early age. By 8 to 12 weeks of age, you should introduce your puppy to the concept of fetch. Puppies not exposed to the idea of fetch at that early age may have difficulty understanding it later and may never learn the concept.

Between 2 and 6 months of age, puppy games still center around play fighting. If your puppy has other dogs to play with, that's fine, but you also want him to play with you. When playing with people, you need to redirect his play fighting games to something more appropriate, such as fetch.

As your puppy grows, he'll be ready for some more sophisticated toys. Various puzzle and interactive toys require him to work to get treats or smaller toys out of them. Such toys are great for occupying his mind when you can’t be with him. Rotate your dog's toys, changing them out every few days to keep him excited about them.

Between 7 and 12 months of age, much of your puppy's play centers on showing you how much faster, stronger and smarter he is than you. You can play along, but make sure you win, and that you are the one to say when the game is over. Tag games, while tempting, can teach bad habits unless you have a "game over" word that means it's time to quit playing and that he must now come when called.

The Importance of Play

Games challenge your dog mentally and physically, both important for keeping your dog calm and well-behaved at home. Lack of exercise is implicated in many behavioral problems. Play is also important for physical and intellectual development. Puppies run, twist and wrestle, developing muscles, agility and strength. By playing games that require your puppy to seek out hidden items, follow scent trails or make choices, your puppy learns to use his brain and senses.