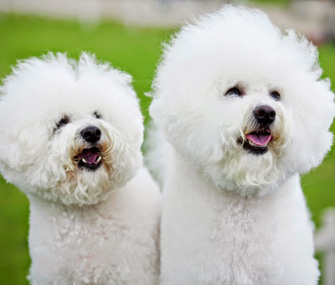 Thinkstock
Dr. Patty Khuly's client was not happy when she accidentally called a male Bichon Frise named Coco a she instead of a he.

Yesterday I committed a common faux pas — common for me, anyway. Upon greeting a Bichon named Coco, I commented on her freshly groomed coat. “She’s so gorgeous in her white fur coat!” I exclaimed. To which the affronted owner dryly replied, “He’s a he, not a she.”

Gulp. I’d just suffered an excruciating bout of foot-in-mouth disease. Thus chastened, I backpedaled by feigning a second look before comparing his testosteronic majesty’s visage to the likes of George Clooney. Of course, it was a stretch, but once you’ve committed this particular sin, you’ve got to work hard to make it right.

The frequency of instances like the one with Coco explains why I’ve been thinking a lot about pets and parts of speech. How is it that owners can have such big problems with such tiny pronouns?

I understand that the personal touch my clients expect requires careful attention to detail with respect to all things, but here’s where I have to wonder: How are my clients more willing to forgive transgressions like flubbed names and forgotten previous conditions than their concept of their pets' gender?

After all, our pets are largely spayed and neutered, so, in a sense, their gender is a moot point.

Why Is Gender So Important?

Viewed in that light, it’s kind of impressive that we care so much whether a veterinarian gets gender right. And yet, as a culture, we care very much about our pets' sexual classifications.

Think I exaggerate? Consider the calamity that befell a recent couple who adopted a kitten who had shown up at their door. “We named him Morris, because he’s an orange marmalade color, and we’re sure he’s going to be a beautiful boy just like the cat in the commercials,” one of them said.

And it seemed like an awesome choice until I had to tell them he was a she. The chill that descended on that exam room when the I-told-you-so's started flying was enough to make me wish I had lied and gotten away with it for life. Then there was the issue of renaming and the disagreements that followed — as if the issue of gender classification demanded urgent attention.

All of which causes me to question: Does it really matter? Why do we feel the need to catalog, label and tag when it comes to sexual category? Why does gender have to be an issue of polarity? Are the genders so different?

READ MORE: Dogs, Cats, You and Your Vet, Spaying and Neutering Issues, Opinion

READ MORE: Dogs, Cats, You and Your Vet, Spaying and Neutering Issues, Opinion