Why Snakes Aren't So Scary 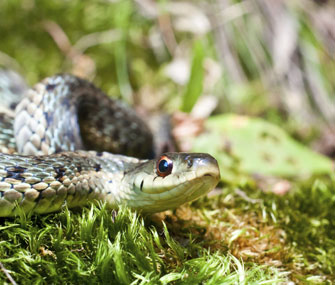 The first thing most people do when they see a snake in their yard is panic. David Steen would like to suggest an alternative.

"What I like to do is just watch and observe what it's doing," says Steen, a wildlife ecologist and blogger at Living Alongside Wildlife. "I think watching local wildlife, whether it's a snake or a bird or any other species, provides a good opportunity to learn about the wildlife surrounding you."

Unlike other wildlife, though, snakes can evoke fear instead of wonder — fear that's usually misplaced.

It may be a cliché, but it's true: Usually a snake is more scared of you than you are of it.

"If you see a snake, it's not going to crawl up to you and bite you," says Steen. "Think about it from the snake's perspective. What can it possibly gain from initiating an attack on a predator that's a hundred times its size?"

And what few people realize is that in the unlikely event that you were bitten, it would probably be no big deal. "I've been bitten by hundreds of nonvenomous snakes and suffered no ill effects except a couple of pinpricks of blood," Steen says. In fact, he says, ask any herpetologist and he'll tell you he'd much rather be bitten by a snake than a mammal — the squirrel bites Steen got while doing wildlife rehab were far more memorable.

Snake bites also don't transmit disease; for instance, snakes don't carry rabies. The only thing you might catch from a snake is salmonella, and you'd have to work at it: "If you're not handling a snake and licking your hands, there's no way you can get sick by one," he says. And unless you live in Florida where exotics like the Burmese python have become established in the wild, your pets are not at risk from nonvenomous snakes, because the native species aren't big enough to prey on cats and dogs.

We know what you're thinking: Fine, but what about the venomous ones? Yes, they're dangerous, but it's important to remember they are in the minority. "Worldwide, there are approximately 3,000 species of snakes, and probably less than 400 are venomous," Steen says. Where he works in Georgia, only 6 out of 42 species are venomous; in many parts of the United States, like the northeast and midwest, the percentage is even smaller.

Despite those facts, many people will kill any snake they encounter — Steen knows that partly because they send the photos to his blog for identification afterwards. "It's a bizarre reaction," he says. "It's scary to think that people think that way about seeing another creature. What if it was a dog, a cat, or even a cardinal; can you imagine saying 'kill it?' The reality is, it's just another animal."