Home ›
Our Pet Experts ›
Dr. Patty Khuly ›
Why the Bulldog Breed Is in Serious Trouble

Why the Bulldog Breed Is in Serious Trouble 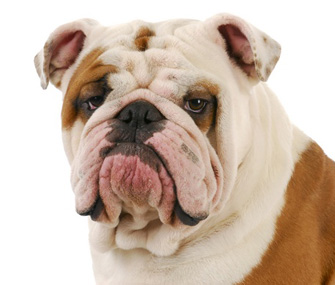 Can the Bulldog be saved? That's the question the New York Times posed this past weekend in its Sunday magazine. It’s a great question — and one that this devoted bulldog owner has tackled before. Here’s my take on the subject.

Humans have a way of getting what we want out of nature. Sometimes, that’s a good thing; other times, it’s a travesty. In the case of the English Bulldog, there’s no doubt about it: No good has been done by breeding these creatures to such extremes of conformation.

Consider the list of ailments inherent to all snub-nosed, short-headed (aka brachycephalic) dog breeds — not just the most impressively deformed English version of the bulldog:

Stenotic nares. This is a condition in which the dog's skinny nose holes impede the intake of air and normal blood oxygenation. This issue can sometimes be addressed surgically by widening the nostrils, but it's not always possible if a dog's airway is affected beyond the reach of a laser or scalpel.

Hypoplastic trachea. Bulldog breeds often suffer from this condition, characterized by a too-thin windpipe that limits air intake. Dogs with this problem are unable to exercise normally and tend to get easily heat stressed.

Overlong soft palate. This problem is also common among bulldoggy breeds. Although they’re bred to have shortened heads, sometimes their nonbony structures don’t comply, so the soft bits stay overlong. Luckily, this is one problem that can usually be remedied surgically. Unfortunately, most bulldog owners are unaware of the issue — and it's often because their veterinarians are, too.

Everted laryngeal saccules. After a few years (or even just months) of working hard to breathe because of the above three issues, these normally inverted structures are turned inside out as a result of the negative pressure imposed on the overly stressed airway. Thanks to this added condition, even less air gets to the lungs.

Heat and exercise intolerance are the most common effects of these conditions, which is why bulldog breeds rarely go out on hot days.

But that’s not all. Bulldog breeds are also subject to dwarfism, or chondrodystrophism. This condition not only shortens the head and affects the respiratory structures adversely, but it also shortens and twists the limbs. As a result, many bulldogs and related breeds suffer from hip dysplasia, knee diseases, angular/rotational limb deformities and spinal maladies.

Finally, there’s this to consider: The roly-poly skin folds that are characteristic of these breeds — and that are, admittedly, so cute — lead to many dermatologic diseases. And a genetic predisposition to allergic skin disease only makes matters worse.

Add to this the fact that many bulldog breeds suffer from excess weight (usually because they can’t exercise like other dogs, but also because their owners misguidedly expect them to be barrel shaped) and you’ve got a recipe for limited day-to-day comfort and an unnaturally truncated lifespan.

There's no doubt about it: As cute as these dogs are, their innate diseases are ugly. As a veterinarian, I feel qualified to offer this as proof of poor breeding. As an owner of two bulldoggy pups (rescued as a result of their severe, breed-related diseases), I feel extra qualified to weigh in on the subject.

But, now, back to the New York Times piece.

Early last spring, I attended a two-day conference in Washington, D.C., on the subject of purebred dog breeding and its animal welfare implications. The Purebred Paradox, as it was titled, was sponsored by the sometimes narrowly focused Humane Society of the United States. Nonetheless, the symposium managed to secure broad-based support from a wide variety of stakeholders — dog health advocates, animal welfare activists, dog behaviorists, canine geneticists, purebred breeders and others were tapped to present, attend and weigh in.

The idea behind the conference: People want purebreds, but we’re breeding these dogs poorly. What can we do to give the public what it wants, while also adhering to reasonable animal welfare standards?

It’s not an easy task, especially when it comes to extreme breeds like the English Bulldog. So it should come as no surprise that the breed was held up as Exhibit A in several expert addresses during the conference. Nor should it shock you that the author of Sunday's New York Times article attended, which is probably why he concluded, as I do, that Bulldogs are great dogs — but they could and should be healthier.

Sure, that means that the Bulldog of my dreams isn’t likely to look like a 2011 “show quality” Bulldog. But, to my way of thinking, that can only be a good thing. After all, these dogs couldn’t possibly get any more extreme in their conformation and still manage to make it around the ring without collapsing.

Then again, the breed registries in charge of defining what constitutes a breed haven’t exactly proven themselves capable of creating breed standards that promote good health among bulldoggy breeds. Ultimately, it's these standards that make way for increasingly abnormal conformation.

So shame on them! And on people who are so wedded to canine design they can’t see past their own dogs’ noses –– abnormal as they are.

Tell us what you think. Can the Bulldog be saved?