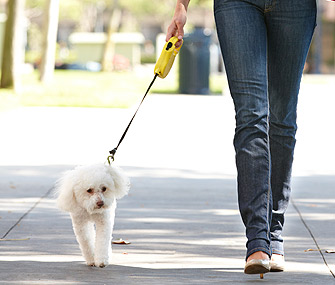 Call me a hater, but I detest retractable dog leashes. In fact, few commercial products recruit the wrath of veterinarians the way this one does. Some of us even believe there’s a special place in hell to redress the kind of wrongs wrought by retractable leashes everywhere. And now (predictably, perhaps) it appears the U.S. tort system will have a chance to opine too.

In an incident dating back to April 2011, a man from Jupiter, Florida, lost his thumb when he took his 25-pound pup out for a walk and the retractable leash got caught in his hand. As of last week’s news, he was suing the device’s manufacturer for the loss. He says it should’ve offered a warning.

In case you’re wondering, this isn’t the first time digits have been amputated via retractable leash. Though I could find no statistics on how many people are injured by these ubiquitous devices every year, rest assured it’s probably in the hundreds, if not thousands. And I should know. As a veterinarian, I’m on the front lines of retractable leash misadventures every single day.

For my part, I’ve never found one that didn’t click off, stick on or unspool suddenly at the exact worst time. Perhaps I’m just mechanically challenged (entirely possible), but it seems like every time I’m handed one it’s set on its “endless-leash” setting… and then the dog it’s attached to suddenly realizes a veterinarian is on the other end. No fun for me.

But Jupiter man and I obviously aren’t the only ones having trouble. Here’s a recent example: Last month a puppy comes bounding into the hospital lobby on his deluxe model "Super-Retracto." I actually think his owner was still 20 feet outside the hospital when a dog-fearful terrier mix did what any other frightened dog would do under the circumstances: She bit him on the snout.

Now, said terrier didn’t do the pup any lasting damage. No blood was even shed. But the venting of the pup’s owner was such that you’d think the shoe had been on the other foot — or rather, the useless restraining device on the other hand. In the end, the pup’s owner had to be gently informed that she was in the wrong and urged to never ever use the retractable leash’s infinite “run amok” setting in a hospital environment.

After all, if my one owner has control over their dog and the other hasn’t a clue on how to use their fancy extendo-gizmo, then it seems pretty clear who's at fault, right?

Maybe in the Wilderness

Unfortunately, it’s a common problem. Owners with overstimulated and stressed-out dogs often lose control of their charges. No degree of thumb clicking and hand-over-hand reeling-in will suffice when the thin line is already wrapped around an elderly woman’s ankles thrice. (“Hogtied granny” is not a game we like to play at our hospital.)

Nonetheless, it must be said that retractable leashes do have their place. But heavy dog interaction zones are never among them. They’re for walking your dog in unpopulated areas where people and traffic are never in the picture. Yet I only rarely see them properly employed.

That’s why I often tell pet owners thinking about this kind of device as their go-to leash to consider my veterinary warning: These leashes are often a liability. And then there’s your thumb to consider.