Home ›
Our Pet Experts ›
Dr. Tina Wismer ›
Why Wild Mushrooms Are Dangerous to Dogs and Cats

Why Wild Mushrooms Are Dangerous to Dogs and Cats 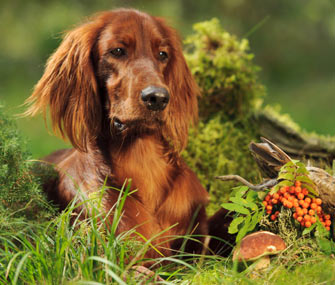 iStockphoto
It's best to keep your pet away from wild mushrooms.

If your dog eats a mushroom bought at the grocery store, there is little risk of poisoning. Most mushrooms that are safe for people are also safe for pets. Wild mushrooms, unfortunately, may be deadly. And in the fall and spring, they can be a concern in many parts of the country. Dogs are more frequently affected by mushroom poisoning due to their scavenging while in the yard or on walks, but cats can be affected, too. In general, you should consult your veterinarian immediately if you suspect mushroom ingestion — and get a sample of the fungus if you are able.

Mushrooms of many different species are found in parks, yards and woods. Wild mushrooms range from edible varieties to those that cause vomiting and/or hallucinations—or even liverfailure and death—in people and pets. Mushroom identification is very difficult, and you should consult a trainedprofessional before eating a wild mushroom of any kind. Mushroom types vary around the country, and the appropriate departments of colleges, schools or agricultural extension offices should be consulted when attempting to identify mushrooms, as their prevalence, preferred locations, suspected toxicity and even physical appearance can differ by region.

To make things even more difficult, the mushroom your dog eats may not be the same as the one still on the lawn. Many varieties grow in the same conditions, and dogs may ingest one type but leave another in the same location untouched, thus leading to a false assumption about what variety was eaten. In addition, many mushrooms, especially those found everywhere and commonly called "little brown mushrooms," can look similar yet cause different symptoms that ultimately may be lethal.

Despite their outward appearances, mushrooms are typically grouped by toxicologists and mycologists (those who study mushrooms) according to the dominant suspected toxin they contain (although many poisonous mushrooms may contain more than one toxic substance). Many mushrooms are also known by their common names, but since these can vary by country, region or culture, the same mushroom can be called several things. Here is a brief overview, based on calls to the ASPCA's poison control hotline, of some of the more common mushrooms that cause problems in pets. See our companion photo gallery for a look at some of the more recognizable species of potentially poisonous mushrooms found in North America. 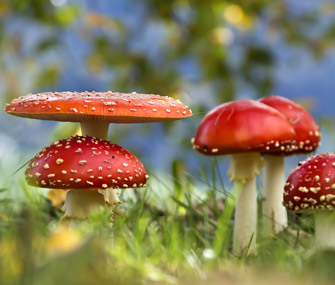 These mushrooms might be pretty, but they can be deadly for dogs.

Thankfully, many mushroom species cause only gastrointestinal upset. Depending on the species, affected dogs begin to vomit within 15 minutes to several hours after ingestion; the vomiting can last a few hours to a couple of days.