Home ›
Our Pet Experts ›
Mikkel Becker ›
Will Bigger Dogs Gang Up On My Small Dog at the Dog Park?

Will Bigger Dogs Gang Up On My Small Dog at the Dog Park? 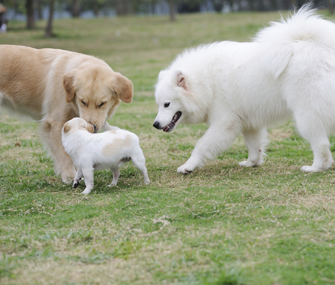 As part of an ongoing series, dog trainer Mikkel Becker teaches you how to address common behavior problems at the dog park.

Q. I’ve heard about "predatory drift" where dogs exhibit predatory behavior. How do I protect my small pet from this at the dog park?

A. The vast majority of dogs do not display predatory behavior toward other dogs. But under the right circumstances, this behavior can be sparked in dogs who've never shown signs of it.

For example, during playtime at the dog park, certain prey-like behavior from another dog can cause this play to morph into predatory behavior. This behavior is what people mean when they refer to predatory drift.In the context of the dog park, predatory drift most often occurs when two dogs of distinctly different sizes are interacting, or when two or more dogs gang up on a single dog.

While the risk of widespread predatory drift at the dog park is rare, pet parents with smaller dogs should be cautious and should supervise their dogs' interactions with larger dogs very carefully.

What Starts As Play Can Turn Dangerous

Although the domesticated dog who shares our living spaces and affection may seem like a far cry from a predator, our dogs originated from wolves thousands of years ago and still have some of the predatory instincts that allowed their ancestors to hunt for meals. In domesticated dogs, predatory behavior manifests in play, such as engaging in a game of fetch, tug or chase. However, there are dogs whose instinctive predatory behavior has resulted in attacks on smaller animals.

In the case of a larger dog interacting with a smaller dog, a playful interaction can turn dangerous if the smaller dog starts to act like prey, such as yelping, struggling or attempting to flee. The yelping can result from something as simple as being accidently stepped on by the larger dog — or it could be a genuine fear response. In either case, this prey-like behavior can trigger a response in the larger dog that can be dangerous for the smaller pup.