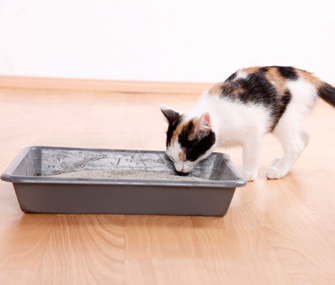 Alamy
Cat won't use the litterbox? It might not be big enough.

If your otherwise healthy cat demonstrates remarkably poor aim or occasionally uses the living room rug for purposes other than intended, a trip to the vet is a good idea to rule out medical causes. Assuming your cat is healthy, veterinarian and behaviorist Norma Guy says it may be time to go big. With the litterbox, that is.

Guy says she had a litter revelation watching cat behavior videos at a veterinary conference several years ago.

"I noticed a number of cats scratching on the wall or beside the litterbox scratching the floor, and then they would eliminate in the middle of the living room carpet. It was like they clearly wanted to use the litterbox, but something was not right," Guy says.

Her guess: Size matters. With that in mind, she began advising owners whose felines had elimination issues to hunt down plastic wrapping paper boxes — the kind designed to slide under the bed. The boxes are about twice the length of most standard litterboxes, providing cats with ample space to stretch and dig, which cats who use their boxes consistently like to do.

Her hunch paid off.

"In a number of cases, this solved [problems] overnight," Guy recalls. "People would phone me saying, 'It worked!' I almost looked forward to cats coming in with litterbox issues. They just seemed very fixable."

To be certain the results she saw in her practice were more than just chance, she recruited 43 cat owners who together owned 74 cats. As detailed in a Journal of Veterinary Behavior: Clinical Applications and Research abstractearlier this year, the University of Prince Edward Island veterinarian asked owners to replace their existing litterboxes with two pristine boxes on opposite sides of a room. In every way but one the boxes were identical—one box, at 34inches, was half again as long as the other. The smaller box was roughly the size of a standard litterbox.

Owners were also provided with an unlimited supply of clumping litter and a notebook to record kitty deposits when waste was scooped out each day. After two weeks, cat owners cleaned the boxes, put in fresh litter, and switched the box positions, placing the longer box where the shorter box had been for the previous two weeks. Again owners counted deposits during the daily cleanup.

Even though the boxes in the study were not as big as the wrapping paper boxes Guy likes to recommend, cats still showed a preference for more kitty box real estate.

"I spend a lot of time watching cats in litterboxes. They like to make this long, reaching motion with their forelimbs. I think the larger boxes provided them with the opportunity to do that," Guy says. "I've gone as far as giving cats a kiddie wading pool." In fact, other research has shown that cats who play in their litter are more likely to make proper use of it when the need arises.

Unlike dogs, cats would rather not eliminate in the same place all the time. "If you watch them outside, they like a pristine location. So you have better odds if you can make the pristine location their own litterbox. Remember, they're doing us a favor by using a litterbox; we're asking a lot of them," Guy says.