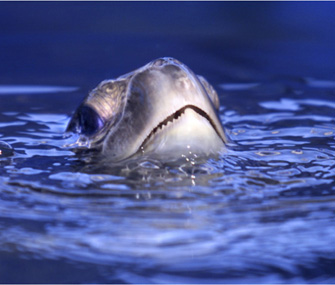 Photo by Jeff Seminoff, NOAA
This Green turtle (Chelonia mydas) surfaces from out of the water.

May 23 is World Turtle Day, an annual event created to celebrate and increase awareness of turtle species around the world. “Turtles are not as popular as cats and dogs, so interest, awareness and understanding is pretty slim,” says Susan Tellem, cofounder of American Tortoise Rescue. World Turtle Day was started 13 years ago by the ATR, who have rescued and rehomed over 3,000 turtles since Tellem and her husband founded the organization in 1990.

“This day is a good way to educate people about how to care for turtles, and to learn what danger they’re in and how to be more aware of what they need,” Tellem says.

According to ATR, turtles and tortoises are threatened by the exotic food trade, habitat destruction, global warming and the pet trade.

“When turtles are transported they get stressed," says Tellem, which means that often a large percentage of turtles die while being transported from Russia and other countries. 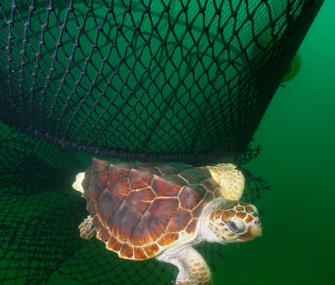 As for marine turtles, National Oceanic and Atmospheric Administration’s national sea turtle coordinator Barbara Schroeder says all species are listed under the Endangered Species Act as threatened or endangered. There are seven sea turtle species worldwide, and six of those are located in U.S. waters.

“While there are some common themes of threats that are significant between terrestrial and sea turtles, in the marine environment, bycatch in fisheries is the major threat around the world,” Schroeder says.

Bycatch, the accidental capture of untargeted species by fishermen, occurs when sea turtles get caught in gear such as gillnets, trawls and longlines. Vessel strikes and habitat destruction around nesting beaches are also contributing to the loss of sea turtles.