Home ›
Our Pet Experts ›
Year of the Dragon: How Lucky the Lizard Stole My Heart

Year of the Dragon: How Lucky the Lizard Stole My Heart 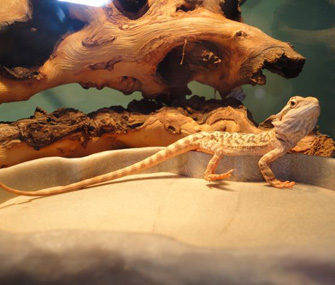 Photo credit: Sarah Mahoney
Lucky the baby bearded dragon shows off some of his cute moves.

As I write this, a baby is demanding my attention. He's just up from his nap, and I can hear him starting to fuss. “Who’s hungry?” I croon, smiling down at that cute, toothless grin and stroking his head.

With a deft pop of the cage, I sprinkle 10 or so live crickets into his tank and watch my baby bearded dragon scamper from one end of his terrarium to the other, chasing down his lunch.

That’s right. A dragon. Technically, he’s a lizard, a gift from my husband. Not exactly a diamond pendant or an afternoon at SpaLaLa, I know.

For some reason, he decided that this year — perhaps because of some epic nest-emptying going on due to the loss of the oldest of our three dogs, and my youngest child traipsing off to college — I needed a baby in my life.

To be candid, my first reaction was lousy. “Thanks,” I said through gritted teeth, thinking this was the worst gift ever.

I had already flunked reptiles. My son, the one who recently escaped to college, had a mercifully brief snake period. We both learned that a.) we’re terrified of snakes and b.) we are even more horrified by the frozen little rodent “pinkies” they eat.

The first corn snake, Rocky, died with his mouth open in a kind of Edvard Munch-inspired snake scream. I still see it in nightmares. The second, Cassandra, somehow escaped. When my insomnia kicks in, I picture her in the guts of the house, 10 years later, living on spiders and mice and waiting to avenge herself on me for my carelessness.

But Lucky is to reptiles what Elmo is to Muppets. He has the dapper charm of Geico’s Gecko, but he's even more adorable because of his obvious babyness: big eyes, all clumsy, prone to fall asleep in strange and awkward positions.

I even treat him like my human babies. In the early days, I’d watch his chest to make sure he was breathing and sometimes even poke him to make sure he was still alive. He’d startle awake and give me this funny little double take — baby bearded dragons have all the same mannerisms as Kramer on Seinfeld.

Like other babies, he worries me. For example, I'm supposed to introduce him to vegetables, especially kale. I hold it in front of his little nose and twirl it. I drape kale artfully around little mealy worms, which he manages to snatch — kale free — from my fingers. (I failed this with college boy, too, who is 18 and still has an uneasy relationship with anything green.)

I fret that he doesn’t poop enough. Although I haven’t taken him into a warm shower with me yet, which reliable sources tell me does the trick.

If you had asked me before he came into my life two months ago, I would have said that lizards were dull, but this guy is actually engaging. He does sleep a lot, basking on one of his logs. But he has frisky periods, racing around his tank, splashing through his water dish and jumping onto the little digital thermometers I use to make sure he’s warm enough.

He has plenty of cute moves, too — my favorite is when he puts his hand up in a high-five and waves it around. (Apparently, this is a submissive gesture, which basically means, “Back off, I mean you no harm.”) And he gives a very annoyed look when the timer shuts off the UV light on top of his tank.

Back in his native Australia, I’m told, beardies are as docile in the wild as the big guys in all the YouTube lizard videos that I watch. But Lucky is a little skittish. (It’s entirely possible that it's on me, that my repti-nervousness comes through.) I stroke his head and pick him up sometimes, but he doesn’t look like he enjoys it much.

He’s growing fast. In just two months, he's about doubled in size. And while the pet store says that he should eat up to 10 crickets a day, I’ve seen him polish off as many as 20. Eventually, he may be anywhere from one to two feet long. (In fairness, I’m not sure that he is a he. He just seems male, but they say that I can’t be sure until he is bigger.)

I moved his tank into my office. I often find myself turning my chair around to watch him, and I look forward to our daily lunch routine. Writing gets lonely, and it’s a much easier way to interact with a critter than with our dogs, who are darling but demanding.

Not Lucky. He only wants crickets and an occasional staring contest. Seriously, he’s like the Clint Eastwood of lizards.

I’m not sure what the Chinese zodiac means for the rest of the world, but I’m looking forward to the year of my dragon.

Sarah Mahoney is a writer based in Durham, Maine. Her usual taste in pets gravitates toward Boxers and Corgis.