Home ›
Dr. Marty Becker ›
Is Your Cat (or Dog) Eating More — or Less? It Could Be the Weather

Is Your Cat (or Dog) Eating More — or Less? It Could Be the Weather 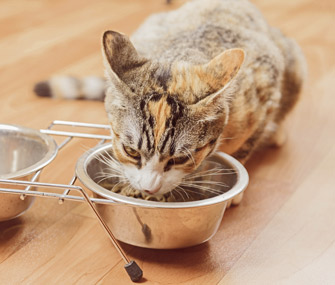 Do you find that your pet eats less during the warmer months of summer and more as winter approaches and the weather starts to get cold? While any sudden changes in appetite or sudden weight loss or gain warrants a call to your veterinarian, your pet's appetite may vary from season to season.

The connection between weather and appetite in dogs and cats hasn’t been studied extensively,butI think it’s safe to say — based on my experience and the anecdotal evidence of other pet owners — that changes in the weather play a role in how much your pet eats. And though there haven't been any large-scale studies on seasonal changes in our pets' appetites, there is some science to back up the idea that the two are connected — at least, in the case of cats.

Cats Eat More in the Winter


A published in April in the journal PLOS ONE detailed the work of English and French researchers who looked at seasonal dietary changes in 38 cats free-fed (given constant access to food) in the south of France over a four-year period. According to their data, the cats ate the least June through August and the most between October and February. In spring and early fall, the amount they ate fell somewhere between those extremes. The cats ate approximately 15 percent less in summer than in winter.

We know that seasonal changes in daylight and temperature trigger significant hormonal changes in mammals, altering their metabolism and influencing the amount they eat. When it’s hot out, mammals become less active and don’t need to eat as much. As the days get longer and warmer, animals hunt less and their cellular metabolism adjusts to the change in appetite. As winter approaches, the lower temperature signals the primitive area of the brain to direct the animal to eat more and store fat so it can survive the coming cold weather.

But while the cats studied ate more in winter, the difference in the amount they consumed didn’t affect their weight. Some wild animals lose weight in winter when food is scarce and start to eat more in spring because food is more available, but that wasn’t a factor for the cats in the study. The fact that their weight didn’t change even though their appetite increased or decreased during the year may mean that their physiology is different from that of wild carnivores or that cats have different energy requirements at different times of year.

The takeaway? The researchers say pet owners may want to consider the effect of weather on the amount their cats eat and adjust the amount they feed at different times of the year.