Home ›
Dr. Marty Becker ›
Why Doesn’t My Cat… Like Catnip? 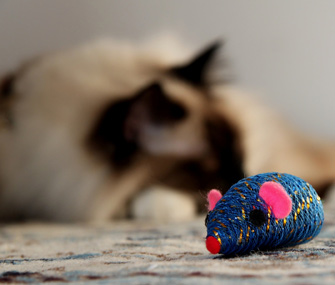 iStockphoto
Cat not hip to the 'nip? He may lack the gene that makes felines go crazy for the stuff.

I get this question more often than you might think. People invest beaucoup bucks in catnip toys, and their cats just sniff and walk away. It’s a disappointment for anyone who has seen a cat in the throes of a catnip high.

A hit of the ‘nip has most cats rolling and yowling in ecstasy. As well they should. For some cats, Nepeta cataria (the scientific name) has a mood-altering effect, causing cats who partake to mellow out, act silly or just be happy (think the feline version of Pharrell Williams’ song "Happy"). Its leaves and stems contain nepetalactone, a volatile oil that’s released when the plant is crushed. The scent is what causes a cat’s mood-altering behavior, possibly by stimulating brain receptors linked to “feel-good” pheromones. Cats who nibble on catnip tend to have a more mellow response.

Catnip is a trip, there’s no doubt about it, but not every cat is sensitive to it. The catnip response is inherited, and some 30 to 50 percent of cats lack the gene that lets them turn on and tune out. Other times, a cat may simply be too young. The proclivity doesn’t become apparent until a kitten is three to six months old.

Be aware, too, that the “high” usually wears off after about 10 minutes. It may take a couple of hours for your cat to respond to it again.

While you can buy catnip in various forms, fresh is best. If your cat isn’t responding to a catnip mouse or the blend you bought from his dealer, er, the pet store, try growing your own. As a member of the mint family, catnip is easy to grow. It prefers sun but tolerates shade.

Make sure you don’t mind its odor before you decide where to plant it, though — the scent has been described as a cross between peppermint and skunk. Your individual perception will determine which odor is most obvious.

Use a mesh screen or other barrier to protect the plant from your cat’s depredations until it reaches its full height of three to four feet. Or just let him sniff it, chew it and roll in it all he wants. It’s easy enough to plant more.

When it’s ready to harvest, dry the leaves and freeze them for lasting freshness — they will keep for up to two years. To feed your cat’s habit, toss him some fresh or dried leaves, crush the leaves and rub them on a fabric ball or mouse or simply give him a paper bag in which the leaves were stored. He’ll go wild. Or mild. Whatever, man.