It's easy to spot a gorgeous Golden Retriever — that smiling face and shiny coat is unmistakable, and there are few breeds with a friendlier temperament. And given the fact that it's the No. 3 most popular dog breed in America, we certainly spot a lot of them. But have you noticed just how many of them seem to be named Maggie and Buddy?

We looked through our database of over 700,000 Golden Retriever names to come up with the top 10 most common monikers for male and female dogs, and we've got the results below. 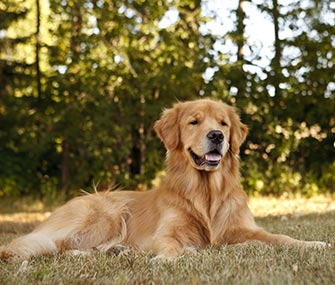 Barbara O'Brien, Animal Photography
We scoured our database of more than 700,000 Golden Retriever names to find out which monikers are most popular for the breed. Did your dog's name make the list?

Curious about how the popular Golden Retriever names stacked up to the most popular puppy names of 2015? Quite a few of the top 10 names were the same for both lists: Maggie, Molly, Sadie, Daisy, Lucy, Buddy, Max, Charlie, Duke and Bear.

And we have an idea as to why some of these names might be so popular for this particular breed; just take a look at the list and then a picture of the pup in question and we think you'll catch on. Think about it: Ginger, Rusty, Sandy and Goldie. They're all names that refer clearly to the Golden's signature coat color!

Do you or any of your dog-owning pals have a Golden with a name on this list?