10 Things to Consider Before Bringing Home That Easter Bunny 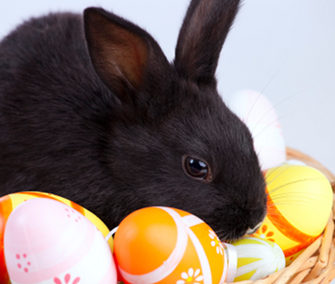 With Easter less than a week away, it can be tempting to buy a furry bunny to round out your child’s holiday basket. But, as adorable as they are, rabbits are more than just a seasonal decoration or a toy. When uninformed owners are faced with the reality of caring for their new pet, that cute bunny all too often ends up in a shelter.

To get a better sense of what to expect, Vetstreet asked Mary E. Cotter, Ed.D., who runs the New York City–area chapter of the House Rabbit Society (HRS) and serves as the vice president for the international HRS organization, to give us the lowdown on bunny ownership. Here are things to consider:

Bunnies can live seven to 10 years — and some even hit their teens. “This is not a quick fix for a lonely child,” Cotter says. “You need to think long term and realize that a full-grown pet requires devotion and care."

And just like puppies and kittens, your little Easter bunny won’t stay small for long. “Make sure your family won’t lose interest in the rabbit as soon as the novelty wears off,” Cotter adds.

In short: If you’re looking for something to fill an Easter basket, you’re better off with a bunny that’s made of chocolate.

Many parents see rabbits as great, low-maintenance starter pets for tykes, but Cotter stresses that nothing could be further from the truth. “Small children like to carry and cuddle their pets — precisely the things that frighten most rabbits,” she says. “Many are also accidentally dropped by children, resulting in broken legs and backs.”

If a child inadvertently hurts the rabbit by lifting him incorrectly, the results could be devastating. “Rabbits have no voice, so they can’t cry out when distressed,” she explains. Instead, they may scratch or bite to protect themselves. Thousands of rabbits are surrendered to shelters every year for this very reason.

It’s not just children who make bad owners; many adults have expectations for pets that are incompatible with rabbit ownership. For example, if you’re looking for a pet who will greet you at the door and snuggle up with you on the couch, opt for a puppy instead.

“People who enjoy observing animals as much as handling them tend to make the best owners,” Cotter says. “If your needs are to have an animal do what you want it to do and obey you, then a rabbit isn’t for you.”

That’s not to say that rabbits aren’t trainable, but they still typically do their own thing. And Cotter says emphatically that you should never attempt to punish or discipline a rabbit, which only leads to fear and defensive biting.