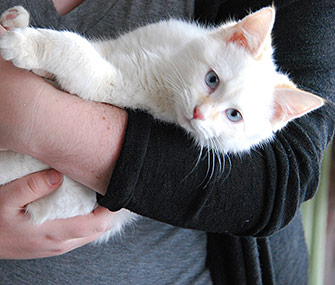 Thinkstock
Forcing your cat to cuddle with you is one of many mistakes that Mikkel Becker sees from well-meaning cat owners.

We’re often baffled by why our cats do what they do. But did you ever stop to think that our cats are likely just as confused by our behavior? Humans are frequently doing irritating and irksome things that don’t make sense from a cat’s perspective.

The way a cat’s human family interacts with him can influence his trust and comfort level. One cat I worked with, aptly named Scratchy, had a tumultuous relationship with his human family. They loved him and wanted to show him affection, but their actions were causing him to withdraw and act out. He clearly perceived their behavior not as loving and caring but as invasive and threatening.

5 Things That Can Stress Your Cat Out

Insisting he snuggle with you.
Sometimes Scratchy was a willing lap cat; at other times, he would use his claws as weapons in his efforts to escape from his humans. His family never knew when he would be friendly and when he would fight them. But Scratchy’s seemingly unpredictable mood swings had a predictable pattern: He would seek closeness during times when he was able to be near people without being cuddled, hugged or petted. The problems would start when his family would try to force Scratchy to interact with them on their own terms. Scratchy would warn his people that he needed space by swishing his tail or darting away. Like Scratchy, many felines experience stress when people force them to interact in a way that feels good to the human but not the cat. Don’t force your cat to snuggle with you, because it’s what you want — you’ll have a better relationship with your cat if you interact in a way that is pleasant for him.

Making him play dress up.
Scratchy’s family often dressed him in the latest fashions, sometimes using ill-fitting doll clothes. Scratchy wasn’t a fan of playing house or posing for photos in his costumes. Once dressed, he would retreat to the closet or under the bed and hide until someone finally removed the clothes. Some cats can be trained to tolerate or even enjoy short periods of dress up, but doing so takes time and patience — and structured, reward-based training. An easier option is to get your cat dressed for the occasion with something he’s more likely to tolerate, like a decorative collar — or to skip the dress up all together and celebrate with a festive toy.

Using human hands as toys.
Scratchy was prone to roughly mouthing and scratching hands. This was a direct result of the wrestling-type play his humans engaged in with him, using their hands as toys. Scratchy had inadvertently been taught that human hands are like prey that he could bat, pounce on and grab. This was a real problem, because Scratchy was prone to attacking the hands of groomers and staff at the veterinary clinic, as well as turning on his family when they tried to pet him. Instead of human hands, play is better directed toward designated cat toys. Doing so distinguishes those objects acceptable for the cat's claws and teeth to dig into versus those objects which are not acceptable. Directing play to toys also helps to reduce confusion over how a human is going to act and how the cat should respond.