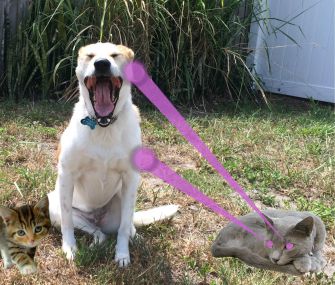 Credit: Kristen Seymour, vetstreet.com
What's the best way to make a funny picture of a yawning dog into something epic? Add cats! And laser beams! This picture of Hollie the dog was enhanced using the CatPaint app.

For some of us, it's not quite enough to take pictures of our own cats. Even if we add in a slew of photos of felines belonging to friends and family, it doesn't quite scratch the itch. Basically, what I'm trying to say is that we can't get enough cat pictures. Or enough cats in our pictures. We want all the cats!

And thanks to the magical power of the smartphone, we can have 'em. Here are five photo apps designed to help you get your feline photo fix.

CatPaint ($0.99 on iTunes)is widely considered the original and is still a favorite among many cat photo app aficionados. You can use photos from your library or take new ones, then add cat pictures from CatPaint's extensive library of cats, cat heads, cat parts (like ears and paws), fine art cats and more — along with explosions and text. You'll hear a meow as you add each cat and moving, flipping, resizing or deleting them is a snap. Plus? Laser beams! Yep, you have the ever-important option to add lasers to the kitties' eyes before saving the picture to your photos or sharing directly via Instagram, Twitter, Facebook or email.

Cat Bomb (basic version is free on iTunes) can pull a friend's photo from Facebook or from your own photos or take a picture, and then the fun begins when you add a cat — or three. The free pack only offers full cats, although for an additional $2.99, you'll have access to cat heads, sneaky cats, kittens, naughty cats and more. There are fewer cat-editing options than CatPaint offers (you can't flip and, sadly, no lasers), but you can share your masterpiece (catsterpiece?) via email, Facebook, Twitter or Instagram or save it directly to your phone. 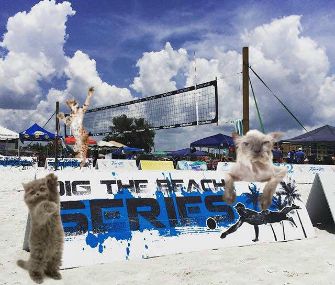 Credit: Kristen Seymour, vetstreet.com
A boring picture of a volleyball court turns into something far more fun with a few kitties added, don't you think? This photo was created using the Cat Bomb app.

Upon opening Cat Booth ($1.19 on iTunes), you're given the option to use a photo from your photo library, Facebook, Instagram, Flickr or Picasa, or, of course, you can take one using either your phone's front or rear camera. The app has a good variety of cat images to add, including exotic cats and cat beards, and when you've added as many cats as you possibly can, you can save the photo to your phone, post it to a gallery, Facebook or Twitter or email or text it to a friend.

Cat Head Photo Booth (free on Google Play) is just what it sounds like — it offers a gallery of cat heads with which you can replace your own (or your friend's or your dog's or — if you really want to get meta with it — your cat's!) head in a picture you take or one from your photo gallery. You can also add text and rotate the photo before saving it to your phone or sharing it directly through Twitter, Facebook, WhatsApp, Telegram or other social media or messaging apps your phone offers.

Snapcat (free on Google Play) is a little different than the other apps listed here, in that it doesn't allow you to add kitties to pictures you already have, but instead allows your kitty to snap some selfies. In "Cat Mode," a bouncing red dot pops up on the screen, which will likely encourage your cat to chase the dot with his paws. As he touches the screen, he'll take pictures of himself. Once you have your cat's photos, you can scroll through them, add filters or stickers, then upload photos immediately to Facebook, Twitter or EyeEm or share anywhere else your device allows.