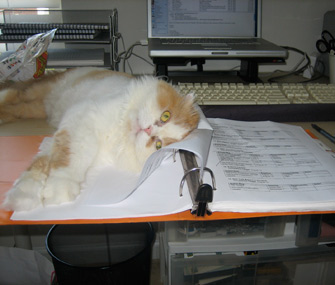 Caroline Golon
How could you not like Romeo the cat? He's very helpful when you need to get work done.

“I just don’t like cats,” some people say. When I hear that, I wonder if these folks have ever actually lived with a cat.

I might have been one of those people. My early experiences with cats were with my aunt’s pampered felines, who typically led a quiet, peaceful life... until my brothers and I would arrive for a visit. When we showed up, the cats’ sanctuary was abruptly disturbed by grabby, loud kids. The cats spent most of their time far away from us, or, if they were unfortunate enough to be swept up in too-tight hugs, they frantically wriggled away. And, really, who can blame them? They weren't mean cats. We just didn't know how to act around them.

So, my first interactions with cats weren’t necessarily warm and fuzzy. But then, many years later, my husband brought cats back into my life. And it was a whole new experience. Here’s what I learned.

There’s a reason cats rule the Internet. Have you ever watched a cat play in a paper bag? Bat at a swinging toy? Paw a milk cap across a hardwood floor? It’s hilarious.

Cats also zoom up and down the stairs for seemingly no reason. They race down the hallway, stop, pivot, run back down in the direction from which they came, also seemingly for no reason.

They find the funniest places to sit or lay, and they contort into the cutest (and strangest!) positions, as well. Along those lines, does anyone know why cats like to sit in teeny, tiny boxes so much? I don’t really care, I guess, as long as they keep doing it.

And cats are notorious for waking up their humans every morning. My cat, Romeo, has a repertoire of strategies he uses when he’s ready for breakfast. Sometimes, he gently places his paw on my husband’s eye socket. Sometimes, he sits on my chest, staring at me. Other times, he strategically positions his wet, little nose in my ear. It seems like he uses a different tactic every day, perhaps to keep us on our toes... or simply to entertain himself.

For cats, play is natural. They love to bat, jump, paw and pounce. I could watch my cats Romeo and Pugsley play for hours.

Playtime is one of the ways my kids bonded with my cats. Once my daughters were old enough, we allowed them to use a cat wand to play with the cats. The cats had a blast and that’s when they started to feel more comfortable around the little humans in the house. It’s also when my kids started to see the cats as playful pets with personality instead of unapproachable, furry strangers.

I believe cats know much more than they let on. When they appear to be sleeping, my theory is they are absorbing information they can use when they need it.

It’s uncanny that whenever we're talking about Romeo, he knows. He’ll come strolling into the room from wherever he might have been, jump up on the couch and sit down halfway on my lap, haunches squarely on the couch, paws and upper body on my legs. Then, he listens to the rest of the conversation.

Cats Want to Be Near You

While some cats do prefer solitude, many want to be around their humans. And, like people, they have varying degrees of tolerance for embraces. Romeo abhors being picked up, but he has to be touching me at all times when we’re on the couch. If he’s not smushed up against my leg, he’s inches away with one paw extended, touching my arm. And he’s usually purring.

Pugsley, on the other hand, loves to be picked up, stroked and carried. He’ll purr and nuzzle whoever is carting him around.

When there’s a sweet cat pressed up next to you and he’s purring, there’s nothing quite so lovely. Add a few head-butts from your little feline, and your heart is sure to melt.

But, even if the cat in your life isn't terribly interested in snuggling, chances are good he still appreciates your presence (maybe more than you realize). One of my favorite things to do is pull in the driveway and see my cat, Romeo, lounging on the back of the couch, watching the world go by outside his bay window. I see him notice the car, stand up and then disappear to the floor. By the time I’ve reached the door to come into the house, there he is, meowing up at me in greeting. It's the best.

A cat purring beside you seems to make any situation better. When anyone in my household is under the weather, my cats somehow seem to know, and plant themselves beside the sick one.

Or, when I’m up late at night working, they (very helpfully) lie on my keyboard. When my daughters were infants and I was in the midst of the middle-of-the-night feedings, I was never really alone (even if I was the only grown human in the house who wasn't sound asleep). The boys were right there next to me, offering their quiet companionship and waiting for a little scratch under the chin. They were fabulous company.