Imagine this: You and your best friend hit an exercise class together, pick up some treats at a cute boutique, then go out to eat at a restaurant with a special menu for your pal because, after all, she’s a dog.

That’s right. This isn’t the description of a girls’ day out. It’s a sampling of the options that are available to dog owners who live in some of the nation’s best cities for dogs.

In May, online real estate broker Estately named what it found to be the top 17 American cities for dogs. The factors in their list included weather, Walk Score (the city’s walkability), yard size, availability of dog activities, Meetup groups and the availability of dog sitters on Rover.com.

Earlier this year, Nerd Wallet’s finance blog compiled a list of its top 10 cities to have a dog. It had some similar criteria but also focused on the financial aspects of having a pet. Its factors included walkability, the number of dog parks where you can get out to socialize and the cost of a visit to the vet.

Below, Vetstreet highlights the cities that made an appearance on both lists — and we went to the source to ask dog owners in those lucky seven spots about what makes their hometown so great for their best friends. 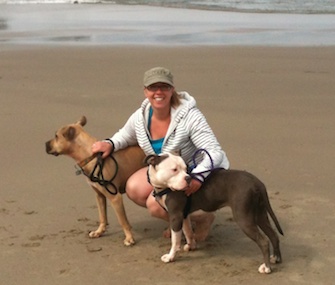 Courtesy of Lizz Smith
Lizz Smith stayed at a dog-friendly beach rental near her hometown of Portland, Ore., with Pit Bulls Kevyn and Squishy.

Topping both of the lists was the Pacific Northwest’s Portland, and we can see why. First, it has the largest number of dog parks per capita of any large city in the U.S., according to Estately — and you can bring your pooch with you to many places catering to humans. They say it’s also home to 19 pet massage therapists and is one of pet-sitting site Rover.com’s top 20 cities. Nerd Wallet finds that on top of that, Portland has relatively inexpensive veterinary care.

“You see a lot of people who do take their dogs with them everywhere because you can,” says Lizz Smith, a Portland resident and owner of two Pit Bull Terrier-type dogs, Squishy and Kevyn.

She says some area restaurants, such as the Tin Shed, even offer a dog menu — Portland’s answer to the kids’ menu. There are also plenty of boutique pet shops that supply the demand for high-quality food and treats for furry family members. After all that food, you and your pup can get a combination workout at Sit Stay Fit, which offers fitness classes for the two of you.

“Every park that you can find in town has a dog zone,” says Smith, who volunteers with the Born Again Pit Bull Rescue. “And being in a town where it rains all the time, there are a lot of indoor dog parks.” 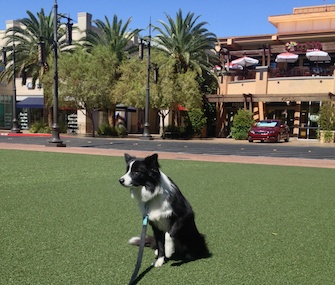 Courtesy of Joe Lilly
Nessie hangs out at Town Square in Las Vegas.

You might not think of Sin City as a place that’s teeming with dog parks, but it is! According to Estately, it has the third best number of them per capita (25), and Nerd Wallet adds that one dog park even has gated areas for small, medium and large pups. It's home to a radio show called The Las Vegas Hot Diggity Dog Show, Estately reports, although it also lists a con: a low walkability score. On the plus side, Nerd Wallet finds that the city has affordable vet care.

The dog owners we talked to say that the benefits don’t end there. Joe Lilly, who has been a Las Vegas resident for 10 years, lives just 10 minutes from the strip with his 1-year-old Border Collie, Nessie (that’s short for The Loch Ness Monster). “Las Vegans really seem to love dogs,” he says, possibly due to the number of dog-friendly outdoor malls close to the city, such as Town Square and The District at Green Valley Ranch. There, many of the retailers will offer your dog water and treats.

As far as walks are concerned, Lilly says that the weather is “always nice,” and he and Nessie often squeeze in a one- to two-hour hike in the early morning hours, before the temperature begins to rise. Lilly, who helps train and rehabilitate dogs, notes that the city is surrounded by parks, mountains, deserts and lakes — so you can take your pick of how to spend time outdoors with your pooch.

Kelley Gustafson moved to the Las Vegas metro area from California with her family, including 11-year-old white German Shepherd Dog Whistler, last summer. Gustafson says Vegas is the “best city we have lived in for dogs. [There are] lots of trails and sidewalks, too. We are in a new subdivision that has the dog bag trees to pick up after your dog, and I know we are not the only ones. This city seems to have a lot of services for dogs — grooming, vets and pet stores galore.”