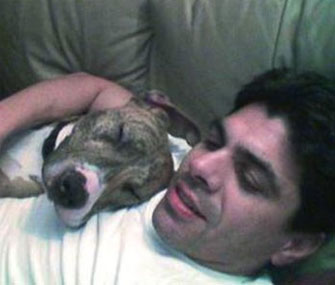 Last week, soap opera actor Nick Santino euthanized his beloved five-year-old Pit Bull, Rocco — a decision that he said was forced on him by his New York condo board, which has a policy that bans residents from owning the breed. Just hours later, Santino took his own life, writing that he had “betrayed his best friend,” reported the NY Post. “Rocco trusted me, and I failed him. He didn’t deserve this.”

A board member told the newspaper that Santino’s death had “nothing to do with the pet policy.” Apparently, the dog had been grandfathered in and wasn't subject to the policy, but Santino claimed that he'd been harassed about the dog by members of the board.

Punishing a Much Maligned Breed

Santino’s actions of euthanizing a healthy dog and then committing suicide may be hard for many people to understand, but bans of so-called "dangerous breeds" often leave owners of healthy and nonaggressive Pit Bull–type dogs in heartbreaking situations.

In December, a former Chicago police officer had to give up his service dog, a Pit Bull and Labrador Retriever mix, when he moved to an Iowa town with a ban. A federal judge ultimately issued an injunction, allowing the man to keep his dog.

Even Major League baseball stars aren't immune: When Mark Buehrle joined the Miami Marlins in January, he had to move his family to Broward County because one of his five dogs, an American Staffordshire Terrier (also sometimes called an American Pit Bull Terrier), wasn't allowed to take up residence in Miami-Dade County, where the ballpark is located.

“To single out any breed is self-defeating and purposeless,” says Jim Gorant, author of The Lost Dogs, a book about some of the dogs who once belonged to NFL player Michael Vick. “Any dog of any breed can be dangerous — punish the deed, not the breed.”

You don't have to face the challenges of owning a banned dog to understand the enormous grief and guilt that Santino felt about Rocco's death.

Coleen Ellis, a pet loss expert and the founder of the Indiana-based Two Hearts Pet Loss Center, says that Santino’s case is not as unusual as you might think. “I can give you two scenarios in which [members of the family] took their lives,” says Ellis, who notes that this generally happens when there are already a lot of other stresses on the pet owner.

In Santino's case, he was described as a struggling actor who had found roles on All My Children, Guiding Light and Gossip Girl. Perhaps the pressures of an uncertain career, compounded with other unknown factors, may have made his dog’s death too much for him to bear.

“Among the thousands of families that I’ve helped in this process, I generally hear the statement, ‘I don’t know how to live,’ ” says Ellis. "We need to recognize how big, how deep and how intense the human-animal bond can be.”

How can you recognize a loved one whose grief over pet loss is too much to handle? Ellis says that your main role should be to “honor the story” of the person’s loss and simply be a good sounding board.

Many times, says Ellis, pet parents simply want you to sit with them while they grieve. Ellis, who spent many years working in the human funeral industry before opening a pet funeral home, adds that they just want you to listen.

Upon hearing Santino's story, many pet lovers will likely wonder why the actor couldn't find another home for Rocco. The Humane Society of the United States offers lengthy advice on what you can do if you feel that you must give up your pet.

It's possible that Santino was in too dark a place to let people know just how dire he felt his situation was. According to the NY Post article, a friend of Santino’s ultimately comprehended this when the person posted the following comment on Facebook: “Why didn’t I just take Rocco when you called me back in November? Why, why, why???”