Animal Eating Disorders — They're More Common Than You Think 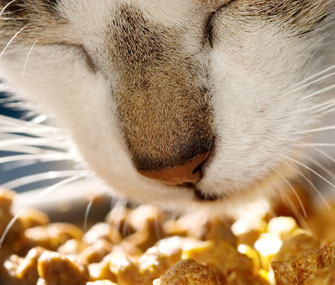 If humans can have eating disorders, is it possible that pets can too?

While dogs and cats can suffer from issues with eating, their problems don’t always parallel the disorders that commonly afflict humans.

Plus, diagnosing an eating disorder in a pet comes with an added caveat: It can be difficult to determine if the cause is behavioral, medical or even nutritional.

For the majority of pets who eat too much, “it’s not an eating disorder as much as a feeding disorder,” says Dr. Julie Churchill, Ph.D., Diplomate ACVN, Associate Clinical Professor at the University of Minnesota Veterinary Medical Center. “Owners assume that if their dog is begging, it means he’s hungry.”

But dogs eat less to satisfy hunger, and more because food seeking is a normal canine behavior.

“It’s a preserved evolutionary trait from when dogs hunted, and it was feast or famine,” explains Dr. Churchill. “Dogs are gluttonous, opportunistic feeders — they’re capable of eating 16 percent of their body weight in one sitting, and they don’t turn it off when they’re full.”

And while cats were also born to hunt, it’s rare to spot a fat barn feline.

“Cats may hunt to excess, but they usually don’t eat to excess,” says Dr. Churchill, adding that obesity occurs in kitties “who don’t have a hunting ‘job,’ and have a food source that’s too available.”

Of course, that’s not to say that there aren’t behavior and medical problems that can lead to overeating.

Certain medications can cause overeating, and it can also be a sign of an underlying medical condition, including hyperthyroidism, diabetes, Cushing’s disease and gastrointestinal diseases.

“I have seen cats who are cranky and irritable if they’re the slightest bit hungry,” adds Dr. Christopher Pachel, Diplomate ACVB, of the Animal Behavior Clinic in Portland, Ore. “They launch themselves at their owners with teeth and claws bared.” In such cases, Dr. Pachel recommends training to modify the behavior, but it’s sometimes also necessary to adjust a cat's diet in consultation with a veterinarian to avoid adding weight.

While a dog can miss a day or two of meals, any prolonged stint without eating can be disastrous for cats, who can develop hepatic lipidosis, also known as “fatty liver disease.” In most cases, no amount of begging or wheedling can coerce these cats to eat, and they will literally attempt to starve themselves to death.

According to Dr. Pachel, although anorexia is often the first sign of illness, it can also have behavioral roots: “After the loss of a family member, whether it’s a pet or a person, pets may show signs that are consistent with depression, including social withdrawal and loss of appetite."